The new feature, which will officially be available soon, is called Message Yourself. It will let users send messages to their accounts. 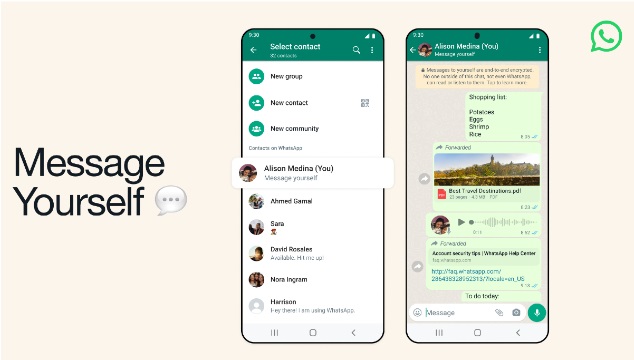 WhatsApp has introduced a new feature.
The instant messaging platform announced a new feature that allows users to message themselves.
The new feature, which will officially be available soon, is called Message Yourself. It will let users send messages to their accounts.
This will be useful for messages such as to-do-list, reminders, or draft messages to be sent later. WhatsApp says the feature will be rolled out for both Android and iOS users in the coming weeks.
The self-chat can also be pinned and archived.
How to use:
According to the Mata-owned platform, users will see their contact at the top of the contacts list on WhatsApp when they create a new chat. Tapping that contact will take them to the chat screen they can use to send messages to themselves.
To use this feature, first, open WhatsApp and create a new chat, your contact will be visible at top of the list, then click on your number and then start messaging yourself. It will reflect on the application upon updating it from Google Play Store and Apple App Store upon its launch.
Not quite new:
Although the native feature to message yourself is new on WhatsApp, some users have already been using a workaround for some time. You could already send messages to yourself using the app’s ‘click to chat feature.
Nonetheless, the new offering removes the additional steps that users needed to self-chat using the wa.me URL.
This feature is also available on other platforms such as Microsoft Teams and WhatsApp’s rival Signal.
Telegram also offers a similar feature called Saved Messages that lets users bookmark any important messages as well as save their notes and reminders that can be accessed in the future.
Top Stories