Juventus Entire Board of Directors Resign Amid Charges of False Accounting


the unanimous decision was made by the board of directors at the Italian giants to resign en masse. 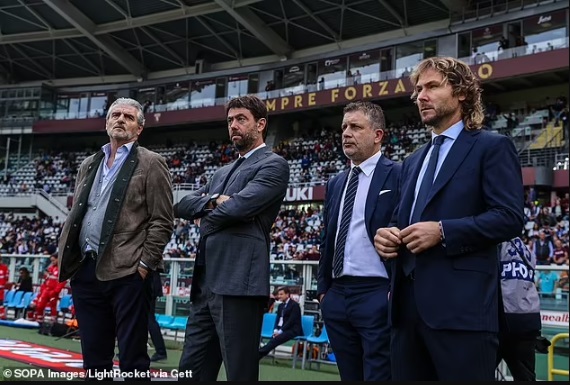 The entire board of directors of Juventus have resigned.

According to Mail Online, the unanimous decision was made by the board of directors at the Italian giants to resign en masse, leaving them in a state of flux amid the mid-season World Cup break.

Managing director Maurizio Arrivabene is set to remain in charge of his administrative duties despite also resigning, with the club set to fall into a significant period of transition.
The 2021-22 season saw a year of record-breaking losses published by the Turin club, with a £220million (€254.3m) loss registered.
The decision for a mass exodus from the board was made on the proposal of president Agnelli, after the board agreed that it was in the best interest of the club for a new group of executives to take over at Juventus.
Agnelli wrote a letter to all Juventus employees in which he heralded 'extraordinary results' including the building of their Allianz stadium, as well as nine consecutive league titles for the men's team and five in a row for the women's side.
He also talked about the Champions League final appearances in Berlin and Cardiff and then observes: 'We are facing a delicate moment in society. Better to leave everyone together, giving the possibility to a new team to overturn the game'.
His letter, sent to all employees before resigning, continued: 'When the team is not compact it lends itself to the opponents and this can be fatal.
'At that moment we need to have clarity and contain the damage. I will continue to imagine and work for a better football club, comforted by a phrase by Friedrich Nietzsche: "And those who saw themselves dancing were considered crazy by those who did not hear the music".
According to various Italian media outlets, the unanimous decision comes as a result of involvement in the Prisma investigation, opened by the Turin Public Prosecutor's Office.
'Remember everyone, we will recognise each other everywhere with a look: we are the people of Juve!'
A statement published on the club's official website said that the board received 'new legal and accounting opinions' from independent experts in charge of assessing the 'critical issues'.
The full board of directors also includes Laurence Debroux, Massimo Della Ragione, Katryn Fink, Daniela Marilungo, Francesco Roncaglio, Giorgio Tacchia and Suzanne Keywood, as well as Agenlli, Nedved and Arrivabene.
On Tuesday, October 25, the club denied any wrongdoing after allegations of false accounting and market manipulation followed an investigation into the club's financial statements.
A source close to matters claimed that there were 15 suspects in the investigation, including Agnelli.
The club issued a statement, saying: 'Juventus remains convinced... to have acted in compliance with the laws and regulations governing the preparation of financial reports, in accordance with accounting principles and in line with the international practice in the football industry.'
The Turin prosecutor had alleged that the club misrepresented financial losses in the period 2018-20, with prosecutors investigating the amount ascribed to player sales.
Top Stories