Jonathan stated this on Thursday in a speech delivered by his aide and a former Minister of Aviation, Osita Chidoka. 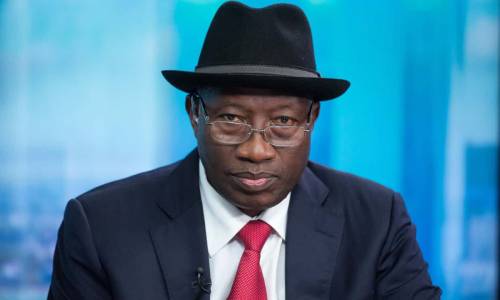 He lauded ex-President Olusegun Obasanjo for his contribution to politics and global diplomacy through his letters.

Jonathan stated this on Thursday in a speech delivered by his aide and a former Minister of Aviation, Osita Chidoka.

Chidoka read the speech during the launch of a book titled, ‘The Letterman,’ authored by Premium Times’ Editor-in-Chief, Musikilu Mojeed.

The book was about Obasanjo’s secret letters to former Nigerian presidents, associates, and allies in the country and across the globe.

Chidoka, while presenting the written address from the former president, noted that Jonathan was in Bamako, Mali.

Quoting Jonathan, he said, “Mr Obasanjo is a father-like figure. Indeed, there have been ample letters that changed history. Obasanjo’s letters created engagements within the political arena, diplomatic world and other sectors.

“History will remember Obasanjo for the great things he did, not the quarrels and fights.

“He will also be remembered for debt forgiveness, the creation of anti-corruption agencies and international interventions across Africa. I also commend Mojeed for the work he has done in bringing the letters together in a single book.”

The book reviewer, Archbishop Mathew Kukah, said Obasanjo had made it difficult for writers to write about him.

Kukah said, “Obasanjo developed an obsession with writing his own story. He wrote everything about himself.

“The book covers 25 letters covering different issues, and most of the letters came from Obasanjo’s head, not his heart.”

Buttressing this, Kukah cited a letter written by Obasanjo to Brigadier Eyo Ekpo during the Nigerian civil war.

The Director General of the Nigerian Governors Forum, Asishana Okauru, noted that the author, Mojeed had done Nigerians a favour by putting together the letters that were mostly secret or leaked.

The author, Mojeed, when asked by veteran journalist, Kadaria Ahmed, to describe the moment he realised there was a need to curate the letters into a book, noted that he was surprised to see Obasanjo at the event, adding that he did not acknowledge the letter written to invite him for it.

He said, “Although many say the Obasanjo does not like journalists, I have maintained a decent relationship with him. Even though he sometimes got angry at questions that I asked him or interviews that I did about him.”

Dignitaries present at the event were Olusegun Obasanjo; former ministers Rotimi Amaechi, Fani Kayode; and the incumbent Minister of State for Labour and Employment, Festus Keyamo, among others.