Obi and Uzodinma met yesterday at the Sam Mbakwe International Cargo Airport when the former Governor of Anambra State arrived in Owerri for a campaign tour ahead of the 2023 general elections. 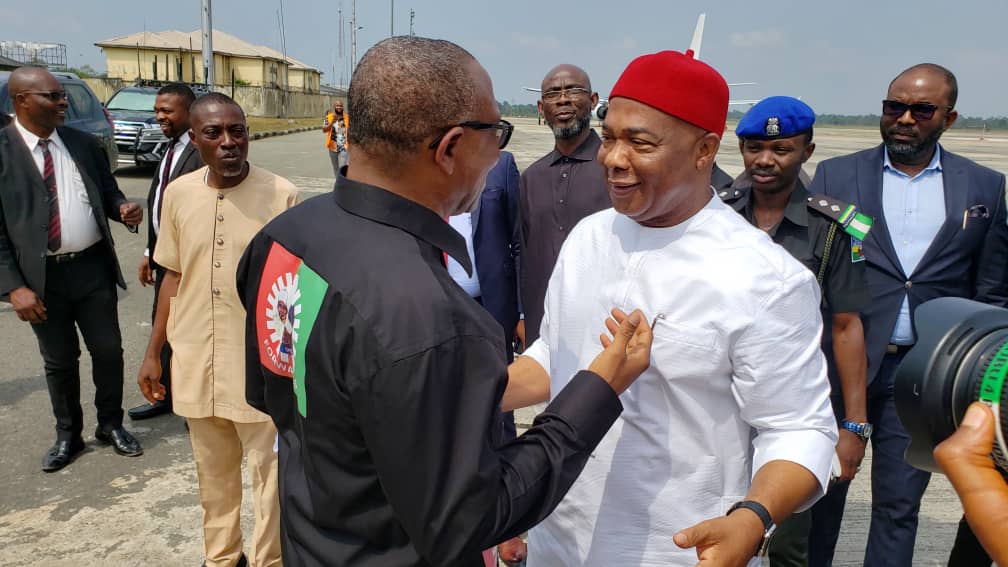 Presidential candidate of the Labour Party, Peter Obi on Tuesday met with Governor of Imo State, Hope Uzodimma.
The meeting happened after Obi arrived the state for his presidential campaign rally.
Obi and Uzodinma met yesterday at the Sam Mbakwe International Cargo Airport when the former Governor of Anambra State arrived in Owerri for a campaign tour ahead of the 2023 general elections.
While exchanging pleasantries at the airport, Obi praised the leadership style of Uzodinma, describing the All Progressives Congress (APC) governor as a good man.
Obi’s remarks are contained in a release signed by the Governor’s Chief Press Secretary, Oguwike Nwachuku and made available to newsmen in Owerri on Tuesday.
Obi, who arrived at the airport before Uzodimma, said he had to wait for the governor when he learnt he was already airborne, as a sign of respect for the Imo state leader.
“Your Excellency, I had to stay back to greet you because I learnt you were already on the way coming. You are a good man, and I owe you that honour to wait to greet you. I really appreciate it,” the release quoted Obi.
An excited Uzodimma, however, thanked Obi for the compliments and wished him well.
Governor Uzodinma had earlier announced that all political parties interested in campaigning at any government-owned facility in Owerri, the Imo capital, were welcomed, as approval for such would not be withheld from them.
He further directed relevant approving authorities in the state to grant the request of any of the political parties to use any facility of their choice for their campaign rally.
The Labour Party happened to be the first to enjoy the privilege.
Top Stories