The police charged Bamisaye Felix, 34, Adebayo Wasiu, 35 and Kolawole Sunday, 42 with theft and possession of a stolen goat. 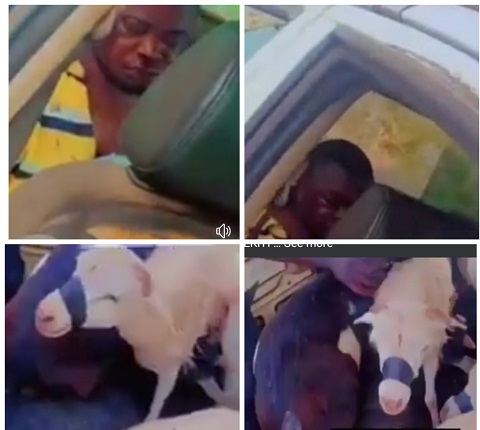 Some goat thieves have been given the beating of their lives in Ekiti state.
This is as the three men were on Wednesday, December 7, docked in an Ado-Ekiti Chief Magistrates’ court for allegedly stealing a she-goat.
The police charged Bamisaye Felix, 34, Adebayo Wasiu, 35 and Kolawole Sunday, 42 with theft and possession of a stolen goat.
Olasunkanmi alleged that the defendants had in their possession five other goats and one sheep suspected to have been stolen.
Prosecution Counsel Inspector Bamikole Olasunkanmi told the court that the defendants committed the offence on December 4, 2022, at 4 am in Iye-Ekiti.
He alleged that the defendants stole one she-goat worth N35,000 belonging to Oyeyemi Funmilayo.
The offence, he said, contravenes the provisions of sections 302(1) (a) and 345 of the Criminal Laws of Ekiti State 2021.
The prosecutor asked the court for an adjournment to enable him to study the case file and present his witnesses.
The defendants, however, pleaded not guilty to the charge while their counsel, Mrs Aduni Olanipekun, prayed the court to grant her clients bail.
Chief Magistrate Saka Afunso granted bail to the defendants in the sum of N50,000 with one surety each in like sum and adjourned the case until January 9, 2023, for hearing.
In a similar development, two other men were caught stealing goats in Ido Ekiti on December 6, 2022.
It was gathered that the suspects allegedly transport stolen goats from different locations to Ado-Ekiti to make asun and sell to people.
The suspects have been handed over to the police for further interrogation and prosecution.
Top Stories