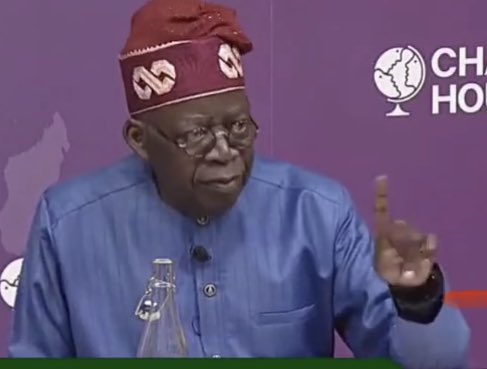 Bola Tinubu has been hailed by his party for his performance at Chatham House in London.
The North-West Presidential Campaign Council of the All Progressives Congress applauded Tinubu's performance saying he displayed a vast knowledge of issues affecting the country.
The APC candidate had on Monday revealed his plans to rebuild the nation’s economy, security, and foreign policy when elected as president.
Tinubu shared his thoughts during his address titled “Nigeria’s 2023 elections: Security, economic and foreign policy imperatives.”
The former Lagos State governor had come under heavy criticism in different quarters for choosing to turn down his invitation to Arise TV town hall meeting for a trip to London to honour his engagement at Chatham House.
But the North West APC PCC under the leadership of Governor Bello Matawalle and his deputy zonal coordinator, Dr Salihu Lukman, defended Tinubu instead.
In a statement issued on Thursday morning by the PCC spokesperson, Muhammad Molash, the council commended the APC candidate on his successful outing in London.
The statement read, “Chatham house has been a source of independent analysis,trusted dialogue and influential ideas for over 100 years.Therefore,it is the right place for Asiwaju to demonstrate his team-work acumen,both in politics and governance.
“We also noted the cognitive capacity and knowledge of issues affecting our beloved country, displayed by Asiwaju Bola Ahmed Tinubu in his presentation at the session. He is obviously the most prepared presidential candidate in Nigeria. Indeed, the secret behind Asiwaju’s success can be found in his ability to assemble a good team and assign each of them a task that must be accomplished!
“The response of Femi Gbajamiamila on policy was impressive, just as the dissection of security issues by Gov El Rufai was equally superlative. Other members of the team like Dele Alake and Dr Betta Edu also displayed high level professional skills.
“The London outing is obviously a good preview to what Nigerians should expect from the Tinubu’s presidency come 2023 God’s willing. It was indeed an opportunity for him to showcase his leadership skills to the international community,his vision for Nigeria,his enviable track records and his ability to identify talents and delegate responsibilities to them.”
Tinubu was accompanied to the lecture by House of Representatives Speaker, Femi Gbajabiamila; Governors Nasir El-Rufai (Kaduna), Abdullahi Ganduje (Kano), Dapo Abiodun (Ogun), Sanwo-Olu (Lagos), Abubakar Bello (Niger), Ben Ayade (Cross Rivers), Abubakar Badaru (Jigawa), David Umahi (Ebonyi) as well as former governor of Ekiti, Dr. Kayode Fayemi and ex-National Chairman of APC, Adams Oshiomhole.
Others were former deputy governor of Lagos, Chief Femi Pedro; former Lagos Commissioner for Information, Deji Alake; PCC Finance director, Olawale Edun; Senator Tokunbo Abiru, Senator Musiliu Obanikoro, Senator Tokunbo Afikuyomi, former deputy governor of Ogun State, Chief Segun Adesegun, Hadiza Bala-Usman and popular Lagos chieftain, Alhaji Mutiu Are.
Top Stories