The pan-Igbo socio-political organisation also described the order as draconian and epitomising insensitivity to the plight of the people. 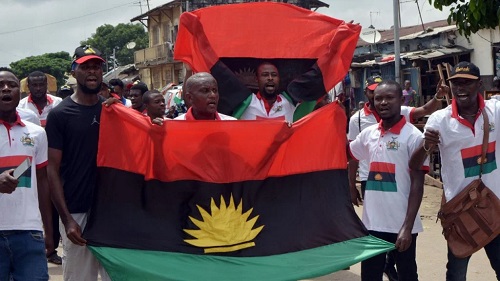 The Igbo Elders Consultative Forum led by a former Governor of Anambra State, Dr. Chukwuemeka Ezeife has asked residents of the South East to reject 5-day sit-at-home declared by Simon Ekpa, a Finland-based protégé of the detained leader of the Indigenous People of Biafra, Nnamdi Kanu.
Punch reported that the pan-Igbo socio-political organisation also described the order as draconian and epitomising insensitivity to the plight of the people.
Ezeife told journalists in Abuja on Thursday night that it must never be observed nor allowed to stand.
According to him, the IECF met, discussed and made critical analysis of some national issues and questions that had far reaching consequences on the peace, unity, stability and corporate existence of Nigeria in general, and Igbo land in particular including Elpa’s sit-at –home order in the South East.
He said, “The Igbo Elders Consultative Forum has always believed that some faceless individuals in government and other unpatriotic elements who do not wish Ndigbo well, and have been working hard with collaborators to truncate the scheduled 2023 general election in the South-East are behind the purported sit-at-home order in the zone.
“The scheduled February 2023 presidential election will be historic in Nigeria because we are optimistic that patriotic and progressive Nigerians will elect Peter Obi of the Labour Party as the next President of this country in a free, fair and credible election. Hence, elements must never be allowed to use the purported sit-at-home order to truncate next year general election.”
The Igbo elders also called on the Independent Electoral Commission to take necessary measures to provide a level playing ground for all the political parties and their candidates as well as conduct a free, fair and credible election in 2023.
“The people of the South-East, both at home and in diaspora, should all collect their Permanent Voters’ Cards and ensure effective participation in the electoral process of next year,” the IECF said.
The Secretary of the forum, Prof. Charles Nwekeaku, maintained that it was the firm belief of Igbo elders that the release of Kanu was central to peace process initiatives in the South-East, as well as the conduct of a free, fair and credible election in the zone next year.
He said, “The moment Kanu is released; no person will hide under IPOB and similar organisations to impose any draconian sit-at-home order on our people. We still ask the Federal Government to obey the unanimous and laudable ruling of the Court of Appeal and release our son, Nnamdi Kanu. The Court of Appeal had in a unanimous and historic judgment cleared Kanu of the remaining seven of the original 15 count-terrorism charges against him.
“Justice Binta Nyako of a Federal High Court, FCT, Abuja had earlier quashed 8 of the original 15 charges against Mr Kanu. The honorable thing for the Federal Government to do now is to release Kanu, and stop this wide goose appeal at the Supreme Court.”
The Ezeigbo of Abuja, HRH Igwe Ibe Nwosu, said now that IPOB has publicly condemned and distanced its members from Ekpa’s sit-at-home order, the state governors as the chief security officers of the various states in the South-East must rise up to their responsibility of ensuring effective protection of lives and property of the citizenry, as well as freedom of movement of people and goods in the zone.
“The governors should empower and sustain vigilante groups in the state to assist in the internal security maintenance in the South-East. We also call on the traditional rulers, community and town union leaders, the clergy, youth organisations and other peace loving institutions and individuals to rise up to the challenge of ensuring not just free movement of people, goods and services in the South-East, but also immediate casting of this draconian sit-at-home order permanently to the dustbin of history. The sit-at-home order must never be allowed to come back to the South-East,” he said
Top Stories