After meeting with the Board of Governors, the school decided to rescind the Grammy winner’s degree. 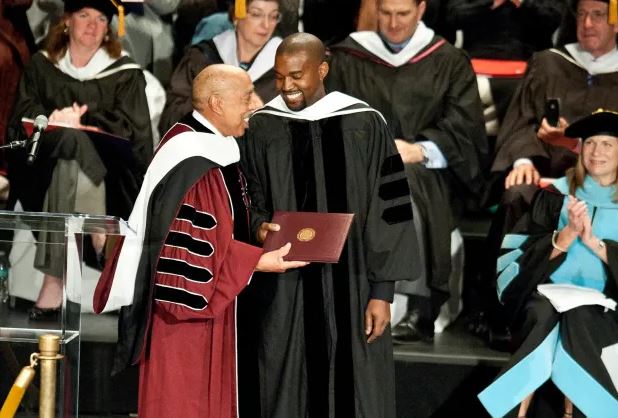 The honorary degree conferred upon controversial rapper and businessman, Kanye West by the School of the Art Institute of Chicago has been revoked following the controversial remarks he made toward the Jewish and black communities.

In a letter obtained by TMZ on Thursday, SAIC president Elissa Tenny explaned that the rapper “has exhibited disturbing behaviors and made dangerous statements that do not align with our community values.”

Tenny wrote that West’s “anti-Black, antisemitic, and incendiary statements” are “disgusting and condemnable” and have been “painful for our entire community.”

While Tenny reiterated that while the private art school — who awarded West an honorary doctorate in 2015 — grants honorary degrees to those who make great contributions to “art and culture” during that moment in time, the 45-year-old’s current actions “do not align with SAIC’s mission and values.”

After meeting with the Board of Governors, the school decided to rescind the Grammy winner’s degree.

“This was a difficult decision to make, and one that has been deliberated thoroughly,” the SAIC president wrote, adding that this marks the first time in the school’s 80-year history that a degree has been revoked.

“Though we firmly believe in the right to express a diversity of opinions and beliefs, the severity of his behavior made it clear that rescinding this honor was appropriate.”

Over the last few weeks, SAIC faced mounting pressure from their students, who started an online petition urging for West’s credentials to be pulled. The group garnered more than 4,100 signatures.

Since early October, the “All of the Lights” rapper has been making headlines for his anti-Semitic outbursts on social media, including one since-deleted tweet where he said he would go “death con 3” on Jewish people.