The 63-year-old man who hails from Sokoto State, also said the Delta (State) and Ughelli (local council) governments have been taking care of the injured. 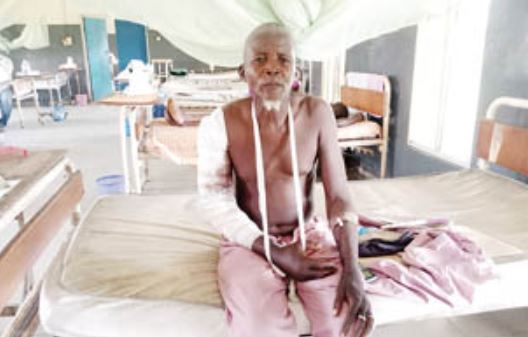 Muhammed Bagudu, a Nigerian man who was a victim of last Friday’s attack on the central mosque on Okoroda Street in Ughelli, Delta State, where 11 worshippers were injured, has spoken up about the tragic incident.

In this interview, said the deputy imam of the mosque is still in captivity.

The 63-year-old man who hails from Sokoto State, also said the Delta (State) and Ughelli (local council) governments have been taking care of the injured.

Gunmen on Friday attacked the mosque where you were praying, how did it happen?

At about 6am on Friday, after our prayers, some of us sat outside when some boys rushed inside the mosque and started asking about our imam. They saw the deputy imam and started shooting. There was nowhere to run to. One of the boys walked up to me and shot me on the hand. I staggered and became unconscious. The people that saw me along the road rushed me to the Ughelli General Hospital. Others who were shot were also brought to the hospital later.

We were 12 in the hospital. Eleven others were brought to join me in the hospital. Some of us have been taken to our home states in the North. I am preparing to go home too so that I can get proper treatment because my hand got really damaged.

Who has been paying your bills?

Even though we are about to be taken away for further treatment, the government has paid part of the money here in Ughelli General Hospital, and even given us some money to pay for our treatment in the North. Some of us have been taken to the University of Benin Teaching Hospital (UBTH).

The local government council also provided money for our treatment and promised to pay back whatever we spend in connection with this attack. So, they are really trying for us.

Also, the day the incident occurred, the Commissioner of Police, Ali Muhammad Ari, told the Ughelli General Hospital management that they should give us the needed attention, saying they would pay any amount spent on our treatment.

Did the attackers abduct anyone?

Yes; they took away our deputy imam. Till this minute, we are yet to see the deputy imam. Whether he is dead or alive, we don’t know. Nobody called us to say we should bring any ransom. We are only praying for his safety wherever he is because it is only God that knows where he is right now.

Was there any misunderstanding between the imam and any person?

Actually, I have been living in Ughelli for 45 years now. I was here in Ughelli when the former king passed away and the new king ascended the throne. Till date, we have never had any issue or crisis with the Urhobo people.

Do you have any quarrel among yourselves (Muslims)?

No, we don’t have any issue among ourselves; we have been living as one. Those of us from Kano, Sokoto, Jigawa and other parts of the North are one here.

If you see the people that attacked you, can you identify them?

I don’t know them. They came when it was still dark and their faces were covered.

What’s your message to the government, community and people of Ughelli?

We thank God for everything, we thank God that nobody died, only that we don’t know about our imam. God should help us bring back our imam alive and in good condition. And may God bless all those who assisted us in one way or the other. May Allah bless all of us.

We are also calling on the government and leaders of the community to give us security around our mosque to avoid situations like this.