The two decamped to the NNPP after meeting with the party’s gubernatorial candidate, Khamisu Ahmed Mailantarki. 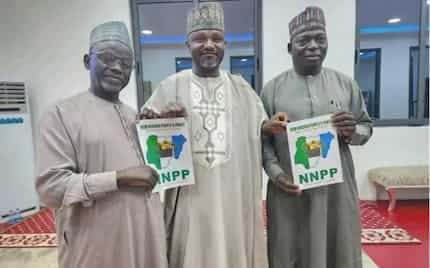 Two prominent northern members of the ruling All Progressives Congress have dumped the party.
The two politicians who are members of the Gombe state House of Assembly dumped APC and crossed over to the New Nigerian Peoples Party (NNPP).
Hamza Adamu and Bappah Usman Jurara announced their defection from the APC to the opposition party on Saturday, December 10, according to DailyTrust.
The lawmakers representing Balanga South and Funakaye South respectively revealed why they took the decision to defect to the NNPP
The two decamped to the NNPP after meeting with the party’s gubernatorial candidate, Khamisu Ahmed Mailantarki.
According to Daily Trust, their defection was announced barely hours before the flagging off of the 2023 election campaign slated for Saturday by Governor Muhammadu Inuwa Yahaya.
The newspaper further noted that the defection made the NNPP the second major opposition in the state, as they now have serving members as legislators in the state House of Assembly.
Why we joined NNPP - Adamu, Jurara reveal Speaking with newsmen, the two lawmakers said they joined the NNPP in the best interest of the state.
According to them, both APC and PDP do not have the requisite leadership qualities to unite and develop the state. It was gathered that since the emergence of Mailantarki as the NNPP's gubernatorial candidate, aggrieved members from both APC and PDP have been moving to the party.
Top Stories