The lady was stunned by her man’s decision to ask for her hand in marriage because she felt it was too early in their relationship. 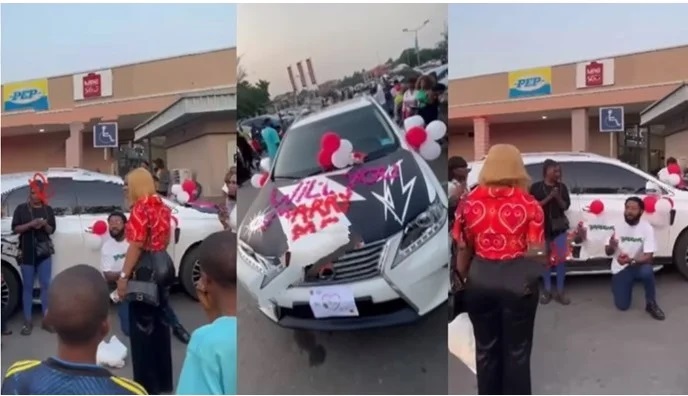 A Nigerian lady has left tongues wagging on social media after she rejected her boyfriend's public proposal.
The man had proposed with a car.
It happened that the lovestruck man decided to surprise the girlfriend by organising a romantic proposal with a car, but the lady turned it down.
According to her, they just started dating.
Onlookers were persuading her to say yes but she stood her ground and wondered why they would be expecting her to agree to marry a man she entered a relationship with a month ago.
See reactions below:
omoleyehannah; I want to believe any Public Proposal we still see now na skit, because…..
silasernny; But how can you as a man be doing this just 1 month..I support the girl. Some girls will foolishly accept because a car is involved and after some months of marriage they will break up.. Courtship is very important before marriage…My opinion shaa.
declutter_sell_ph; Men need to start understanding that not every lady is desperate for marriage these days. If you like carry G-waggon. Women are beginning to go for what they want.
mhiz_bgeal; Just one month of relationship and you wanna propose to her haba o wrong na
diva.prime; No be this guy way book ticket for one girl make she come Abuja way d girl no come be this?
officialmandy2; No be this guy been claim say him send girl flight money she divert and go see her man. Now this uncle sha wan trend… if you went to oko poly between 2014 to 2018 you go know say this guy just like noise. Wo na acting
daniel_.regha__; Best way to deal with a breakup is to forgive ur ex for breaking ur heart, it mayn’t be easy but it’s in ur best interest u do so cos the healing process only starts once u get rid of the emotional baggage; Don’t go for a revenge, instead focus on bettering urself & live ur life.