How 2 Men Tricked 12-Year-Old Boy, Hussaini Into Bush, Plucked Out His Eye In Bauchi


The student of a Qur’anic education who hailed from Kano arrived in Bauchi where he enrolled in Arabic school barely a year ago, the state police spokesperson, SP Ahmed Wakil said in a statement. 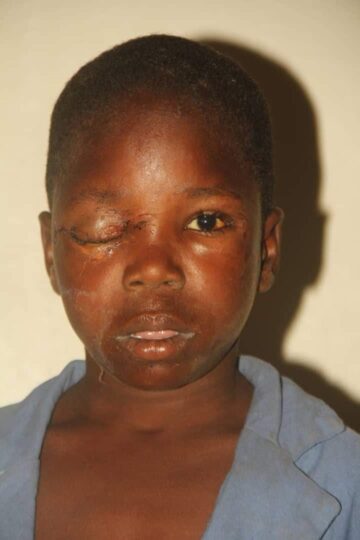 The story has been told of a young boy whose eyes were plucked out by criminals in Bauchi.

Police operatives in Bauchi have since launched a manhunt for two suspect who plucked one of the eyes of the boy called Najib Hussaini, a 12-year-old student of Arabic school at Unguwar Yamma community of the state.

The student of a Qur’anic education who hailed from Kano arrived in Bauchi where he enrolled in Arabic school barely a year ago, the state police spokesperson, SP Ahmed Wakil said in a statement.

He added that the incident occurred on 9th December, 2022 at about 0200hrs at Unguwar Yamma, not far from the victim’s school (Tsangaya).

On how the culprits carried out their evil act, the police spokesperson said, “It was revealed that two unknown people who came on a motorcycle lured the young victim to a nearby house to assist them to call a lady.

“The perpetrators of the evil act thereafter took him on a bike to an isolated area near Hanyar Gonar Wakili of the same village, where they stopped the motorcycle near a bushy area and forcefully plucked the right eye of the victim and consequently abandoned him in his pool of blood.

“The victim however managed to reach a point where he was sighted by some of his colleagues who rushed him to their teacher.”.

He added that the incident was reported to the Ganjuwa Divisional Police Headquarters where the victim was rushed to Abubakar Tafawa Balewa Teaching Hospital Bauchi (ATBUTH).

Meanwhile, the Commissioner of Police, Bauchi Police Command, CP AMINU ALHASSAN has appealed to the general public to always be security conscious and report strange people and suspicious movements in their communities.

CP Alhassan also assured that the perpetrators of such criminal acts would be apprehended soon.

2023: Nnamdi Kanu Should Not Be Used As Bargaining Chip For Election - IPOB Warns Atiku, Others
Popular Stories