After a series of lightning Ukrainian counteroffensives, Kyiv has regained control over around half of the territory Moscow captured in the first weeks of its invasion. 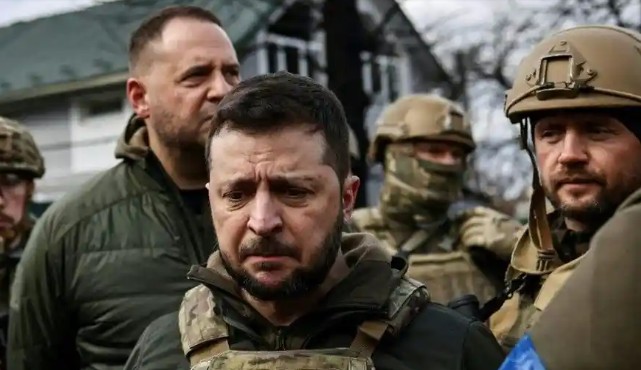 Moscow has said it is yet to receive “Christmas ceasefire” offer from Ukraine.
This is as the war in Ukraine continues for nearly 10 months.
It is now believed fighting may drag on through the winter.
“There is no calm on the frontline,” the Ukrainian president, Volodymyr Zelenskiy, said in his regular evening video address on Wednesday. “Every day and every metre is given extremely hard. And especially where the entire tactic of the occupiers boils down to the destruction of everything in front of them with artillery – so that only bare ruins and craters in the ground remain.”
Asked on Wednesday whether Moscow had seen proposals for a “Christmas ceasefire”, Kremlin spokesman Dmitry Peskov said: “No, no such offers have been received from anybody. This topic is not on the agenda.”
Zelenskiy had called on Russia this week to start withdrawing its troops by Christmas as the first step towards a peace deal, but Peskov said on Tuesday there would be no peace with Kyiv until Zelenskiy accepted the “realities” on the ground – referring to Russian control over parts of four Ukrainian regions it annexed in September following coercive and illegal “referendums”. After a series of lightning Ukrainian counteroffensives, Kyiv has regained control over around half of the territory Moscow captured in the first weeks of its invasion.
Military analysts say a winter deadlock could now set in, even as fierce fighting continues especially in the eastern Ukrainian region of Donetsk, where Russian forces are pushing to capture the town of Bakhmut.
The White House national security spokesman, John Kirby, said the scale of the ongoing violence tempered hopes for an imminent end to hostilities.
“Just given what we’re seeing in the air and on the ground in Ukraine, it’s difficult to conclude that this war will be over by year’s end,” Kirby said in response to a question about the prospects for a negotiated peace with the Russian president, Vladimir Putin. “So there is active fighting going on right now. We would expect that that will continue for some time going forward.”
Separately, Canada said on Wednesday it would revoke a sanctions waiver that allowed turbines for Nord Stream 1, Russia’s biggest gas pipeline to Europe, to be repaired in Montreal and returned to Germany.
The pipeline under the Baltic Sea was shut down for repairs on 31 August but not restarted. It was heavily damaged a month later when it was hit by a series of explosions. European governments suspect the ruptures of the pipeline and another called Nord Stream 2 were caused by sabotage. Putin has called western claims that Russia was behind the explosions as “crazy”.
“Putin has been forced to show that his intention was never to return Nord Stream 1 to full operation, and that the pipeline itself has been rendered inoperable,” Canada’s foreign minister, Mélanie Joly, and natural resources minister, Jonathan Wilkinson, said in a joint statement.
The decision was made after working closely with Ukraine, Germany and other European allies, they said.
Despite the lack of peace talks, hundreds of prisoners have been freed in swaps in recent weeks. The releases – along with progress on talks to resume Russian exports of an ingredient in fertiliser and the extension of a grains deal – have shown the two sides maintain at least limited contact on several levels.
The latest exchange of dozens of detainees included a US citizen, Kyiv and Washington said on Wednesday.
Top Stories