I Will Die A Hero, Show Me No Mercy – Kano Cleric Sentenced To Death by Hanging Tells Court


Kabara appeared in court today for the continuation of his trial over alleged blasphemy against Islam’s Prophet Muhammad (PBUH). 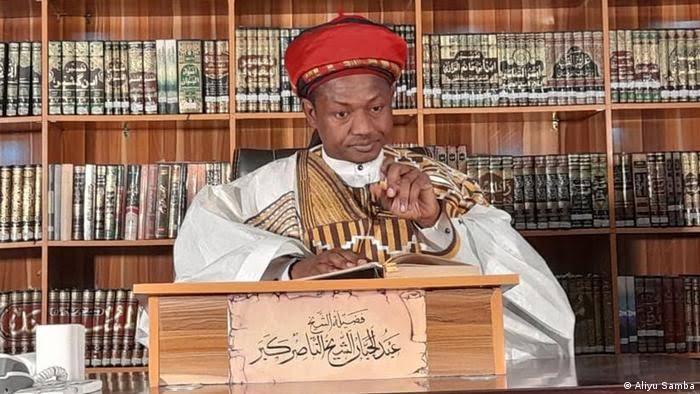 Controversial Kano Islamic cleric, Abduljabbar Nasiru Kabara on Thursday boasted that he will die a hero after an Upper Sharia Court judge sentenced him to death for blasphemy.
Recall that we had reported that Kabara appeared in court today for the continuation of his trial over alleged blasphemy against Islam’s Prophet Muhammad (PBUH).
Kabara was first arrested and arraigned in July 2021 by the Kano State government led by Governor Abdullahi Ganduje.
The government accused the renowned cleric of blaspheming against the Holy Prophet Muhammad, an act it said is capable of inciting public peace.
At the hearing of the case today, the court said it find the embattled cleric guilty of all the charges levelled against him and sentence him to death.
The judge, in his sentencing, ordered the state government to seize the two mosques belonging to Kabara.
The convict was though given 30 days to appeal the judgment or forfeit his right to appeal.
However, before Mallam Ibrahim Sarki Yola delivered the conviction in a court session which lasted over two hours, he asked if Kabara has anything to tell the court.
Barrister Aminu Ado Abubakar, who stood as the defence counsel, prayed to the Court to accord leniency to the accused person for he did what he did out of ignorance.
Kabara, however, stirred mixed reactions after he stood up stating that he did not know the lawyer and that it was the first time he was seeing him.
“I don’t know him. This is the first time I am seeing him. He should not be allowed to speak on my behalf. I can and should be allowed to speak for myself,” he said.
The judge however said the lawyer is recognised by the court as the defence counsel.
Kabara continued saying: “My lord, after I heard how you twisted all my evidence, you turned around all my submissions upside down, you have assigned words to me that I have never uttered.
“Deliver your judgement, and I am not asking for leniency at all. I want all my followers to know that I will die a hero and I don’t want you (the Judge) Ibrahim Sarki Yola to do me any favour or grant leniency. This is my last word. Assalamu Alaikum.”
Meanwhile, the judge ordered a 20 minutes recess before delivering his sentence.
Top Stories