CBN Staff And Wife Sentenced to 13 Years In Prison For Using Hot Iron On 10-year-old Maid, Drilling Nail Into Her Head (Photo)


The state police had in July 2020 arrested the couple for maltreating their 10-year-old maid, Nneoma Nnadi. 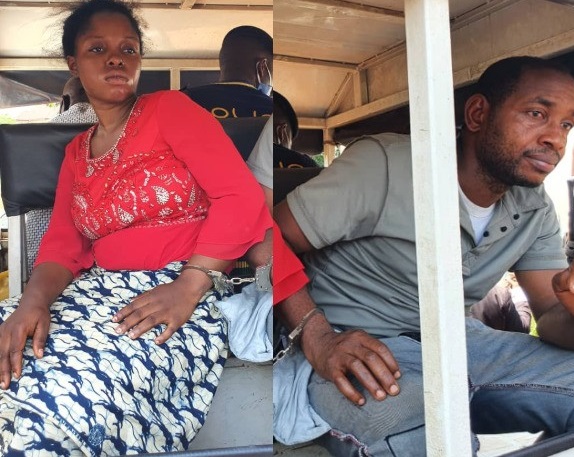 The Enugu High Court presided over by Justice A. C. Ogbuabor has sentenced an employee of the Central Bank of Nigeria Jude Ozuogu and his wife, Ifeoma Ozuogu to 13 years.
The duo were sentenced for abusing a child in their care.
The state police had in July 2020 arrested the couple for maltreating their 10-year-old maid, Nneoma Nnadi.
Neighbours alleged that the couple subjected the victim to serious torture after they alleged she caused their baby to fall to the ground at their home in Aku in the Igbo-Etiti Local government area of the state.
Nnadi was said to have carried her mistress' little baby to pamper her to sleep around midnight when the baby mistakenly fell to the ground. Though there was no physical or internal injury suffered by the baby, the couple allegedly descended heavily on the girl over the incident by burning her skin with a hot pressing iron and also drilling a nail into her head. They allegedly inserted pepper into the little girl's vagina and locked her up in the toilet for refusing to wash plates.
It took the intervention of neighbours who heard the girl's cry, to rescue and rush her to the hospital for treatment. Police officers were alerted and the couple was arrested and arraigned before Justice A. C. Ogbuabor of State High Court 10 on three counts bordering on inflicting grievous harm, administering noxious or piousness substance, and employment of a child as a domestic worker.
Delivering judgment in the suit marked No: HE/121c/2020 between the State (Plaintiff/Applicant and Jude Ozuogu and Ifeoma Ozuogu (1 & 2 Defendants), the court convicted them. Condemning the treatment meted out to the 10-year-old girl, the court sentenced the couple to 13 years imprisonment each.
Justice Ogbuabor convicted the couple on all three counts and sentenced them accordingly. On count one - Inflicting grievous harm, the court sentenced them to three years imprisonment.
On count two - administering a noxious or poisonous substance, the court sentenced the couple to five years imprisonment, and on count three - employment of a child as a domestic worker, the court sentenced the couple to five years imprisonment.
The court, however, ordered that the period the convicts had stayed in custody from the day of arrest should be discounted.
"All sentences shall run concurrently," the judge ruled
Top Stories