The accused identified as Eke Uferemvukwe, Okoloi Damion, both from Nigeria, and Adwin Collines, from Ghana, were arrested in Greater Noida. 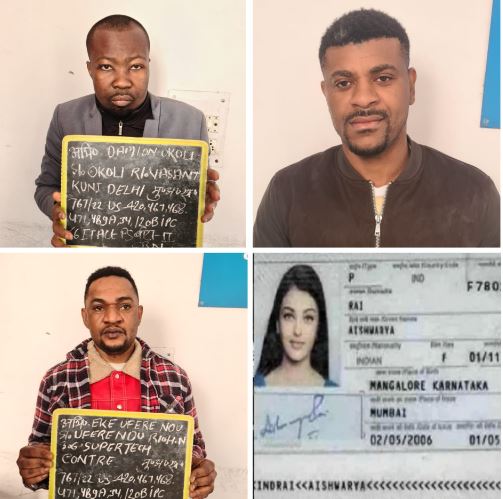 In what will come across as a really startling development, two Nigerian nationals and a Ghanaian have been arrested in India.

They were nabbed for allegedly being involved in cyber fraud.

The accused identified as Eke Uferemvukwe, Okoloi Damion, both from Nigeria, and Adwin Collines, from Ghana, were arrested in Greater Noida.

The accused are 'cyber criminals who, along with their other associates, have been involved in various frauds and have duped gullible people on matrimonial sites, dating apps, social media sites, through lottery fraud, etc,' the police said on Friday, December 16, 2022.

They also recovered several fake passports from the suspects, including one made in the name of Bollywood actress and former Miss World, Aishwarya Rai Bachchan.

The police said they have seized six mobile phones, 11 SIM cards, laptops, printers, and some other gadgets used by the gang in criminal activities. The police also impounded three cars belonging to the accused.

The police had lodged an FIR of fraud on the complaint of a retired Army colonel who was duped of Rs 1.81 crore.

According to deputy commissioner of police (Greater Noida) Abhishek Verma, the suspects duped the 66-year-old complainant on the pretext of purchasing cancer treatment herbs from him.

"A complaint was registered at the Beta-2 police station on December 7 by col (retd) Dr VK Gupta, alleging that he was duped of ?1.81 crore by people posing to be buyers of a ‘Kola Nut’, which is apparently grown in India, and reportedly have medicinal value. A case was registered under relevant sections of the Indian Penal Code and police teams were deployed immediately to crack the case,” said Verma.

"Gupta is a resident of Army Welfare Housing Organisation, Greater Noida. On August 31, I received a message on my social media account from one Ava Evelyn, who claimed to be the purchase secretary of an international pharmaceutical company and offered to become a seller of ‘Kola Nut’, which is grown in India and is used in medicines to cure breast cancer, the woman told me,” Gupta said in his complaint.

"She told me that she used to purchase the nut from a woman named Thapa Devi but since her husband died, I was offered to buy the nuts from Ms Devi for USD 1,000 per sachet and sell it to the woman at USD 3,000 per sachet. I was made to purchase five sachets for ?3.85 lakh,” the complainant said.

According to Gupta, he was gradually coerced to buy more nuts and when asked for payment, a foreign national visited his home and handed him some American dollars. The payment was being done online while the nuts were being delivered to him.

"After I purchased 100 sachets, a foreign national posing to be a purchasing officer visited my home and gave me dollar bundles as payment. He then asked me to transfer him some money online as a conversion fee. Later, I was asked to purchase more nuts and over the last four months, I ended up purchasing nuts worth ?1.81 crore,” said the complainant.

Since November, the suspects stopped all contact with Gupta after which he realised that he was duped.

"When I went to convert the dollars that I was given, they turned out to be fakes. On December 7, I submitted a complaint to the police in the matter," said the colonel.

"The investigators followed the trail of online transactions and nabbed the suspects. They have been identified as Eke Uferemvukwe, Okoloi Damion (both from Nigeria) and Adwin Collines (from Ghana)," Verma said.

"During interrogation, they revealed that they used to look for vulnerable people and targeted them based on their interests. They used to dupe people in the name of customs clearance, and had also set up fake accounts on matrimonial sites and social media sites to dupe the gullible," he added.

The suspects have been arrested under section 420 (cheating), 467 (forgery of valuable security), 468 (forgery for the purpose of cheating), 471 (using a forged document or electronic record as genuine), 489 a(counterfeiting currency), 34 (common intention) and 120B (criminal conspiracy) of the Indian Penal Code.