Nine Arrested As NDLEA Seizes Tonnes Of Narcotics In 5 States


Spokesperson of the agency, Femi Babafemi, disclosed this in a statement on Sunday, December 18, 2022. 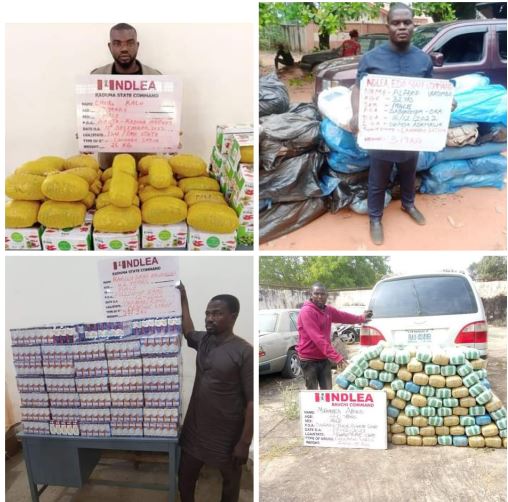 Tonnes of narcotics in Lagos, Edo, Bauchi, Kaduna, and Oyo have been seized by operatives of the National Drug Law Enforcement Agency, NDLEA, during different raids.

Spokesperson of the agency, Femi Babafemi, disclosed this in a statement on Sunday, December 18, 2022.

NDLEA operatives in Lagos on Sunday 11th December intercepted a truck and a bus conveying 113 jumbo bags of cannabis sativa weighing 4,802.84 kilograms around the VGC estate area of Ajah while three suspects: Taofeek Yusuf; Ifeanyi Okorie and Israel Nwachukwu were arrested in connection with the seizures. 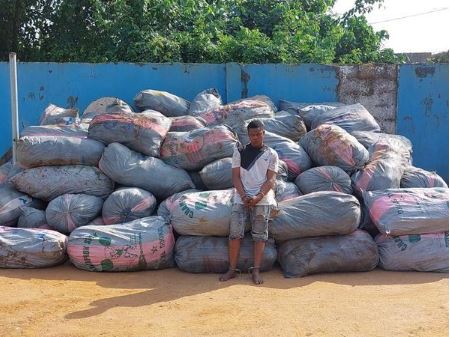 In Gombe state, a total of 1,154,500 pills of Tramadol, Rohypnol and Exol being transported from Onitsha, Anambra state to Gombe by a truck driver, Umar Hassan, 28, were seized on Thursday 15th Dec. at Bye pass area of Gombe by a team of NDLEA officers following credible intelligence.

Also acting on intelligence, operatives in Edo state on Friday 16th Dec intercepted a Honda Ridgeline pick-up vehicle with Reg No BWR 699 CV loaded with 29 bags of Cannabis Sativa weighing 319kgs. The driver of the vehicle, Alfred Vratombo, 32, was arrested with fake police uniforms, which he was using to deceive security men on the road. 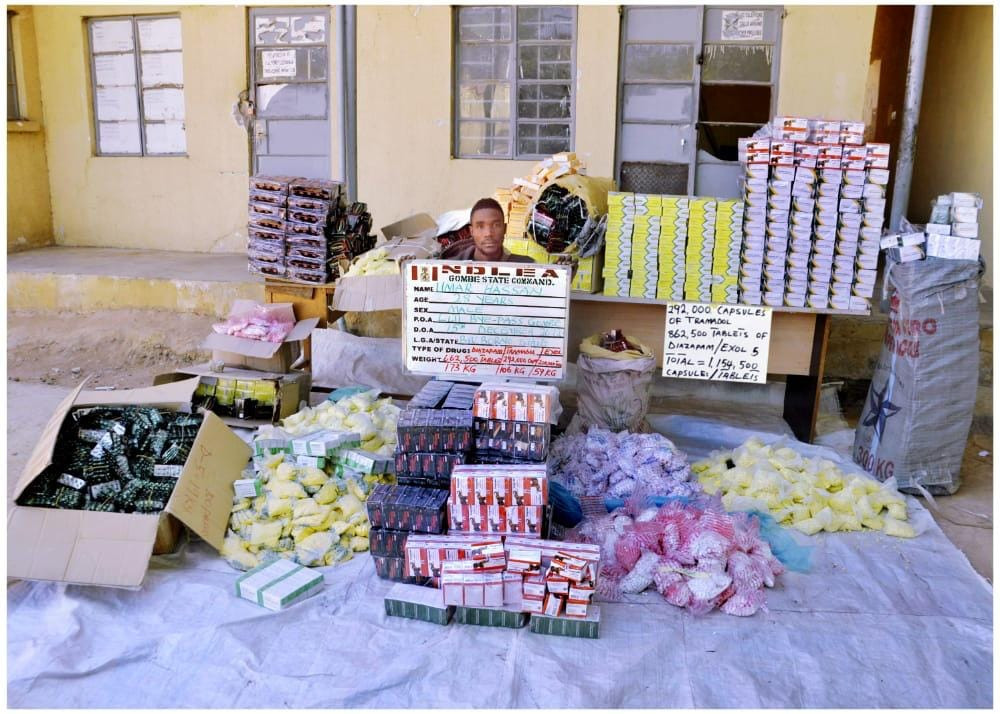 Attempt by a drug dealer, Chucks Kalu, 29, to smuggle into Kano 26kgs of cannabis concealed inside packs of blenders was thwarted by operatives who intercepted the consignment along Abuja-Kaduna express road and later arrested him in a follow up operation in Kano.

Another suspect, Rabilu Sa'ad Abubakar,42, was also arrested in a follow up operation in Kano, following the seizure of his consignment 1,980 bottles of Cough syrup with codeine, concealed inside cartons, were seized along Abuja-Kaduna express road. 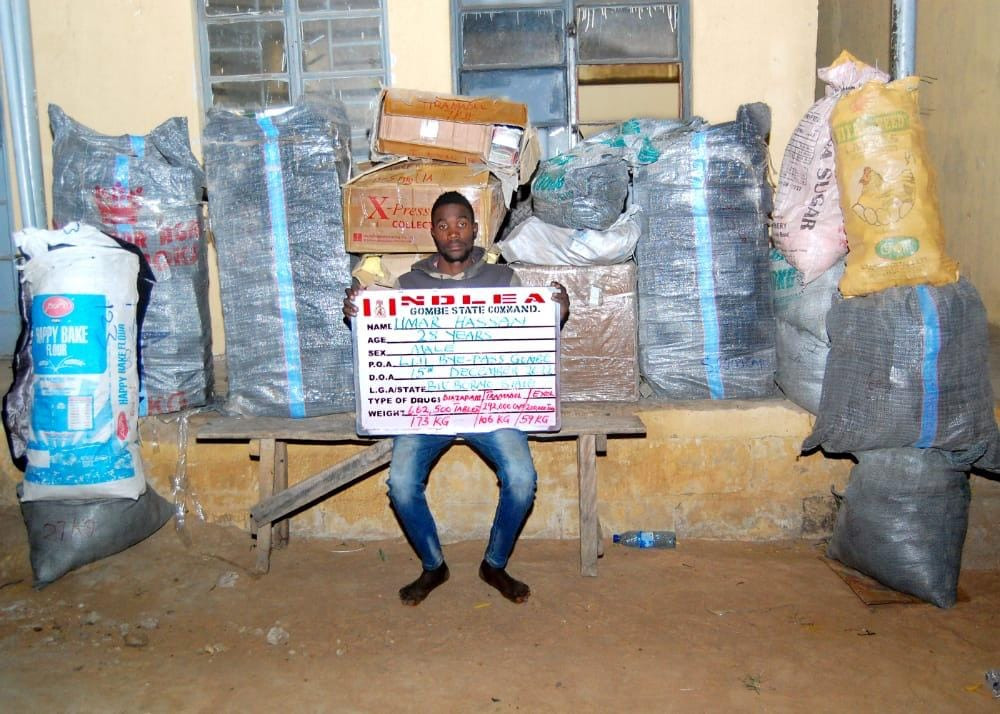 In Oyo state, a suspect, Yusuf Ayinde, 40, was arrested with 50.4kgs Cannabis in his residence at Idi-Ose via Amuloko, Ona-Ara LGA, on Saturday 17th Dec.

While commending the officers and men of the Lagos, Gombe, Edo, Kaduna and Oyo state commands for their commitment and vigilance leading to the arrests and seizures of the past week, Chairman of NDLEA, Brig. Gen. Mohamed Buba Marwa urged them and their compatriots across other formations to continue to surpass their past records of achievements. 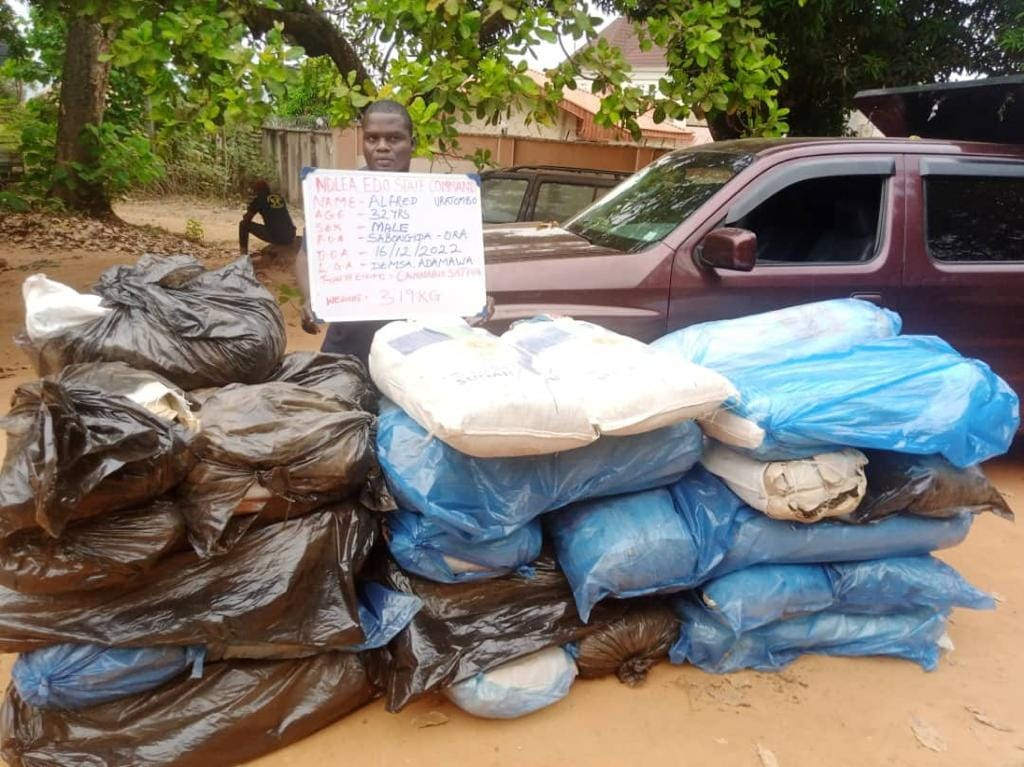 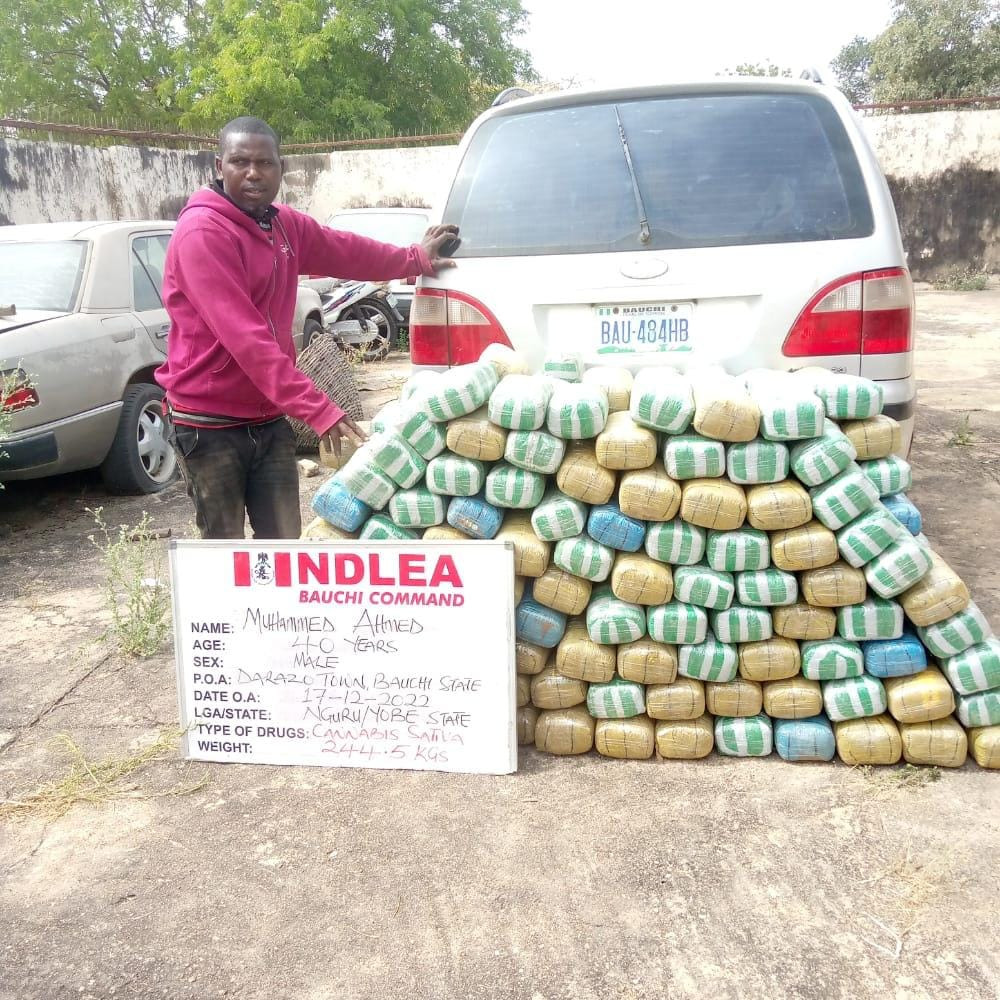 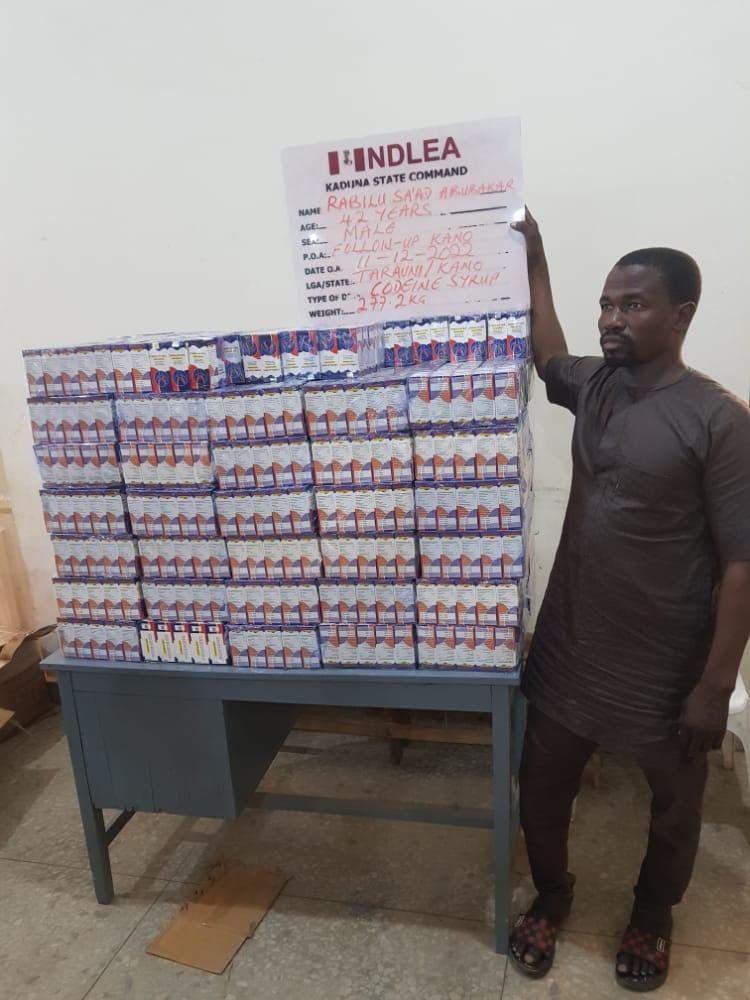 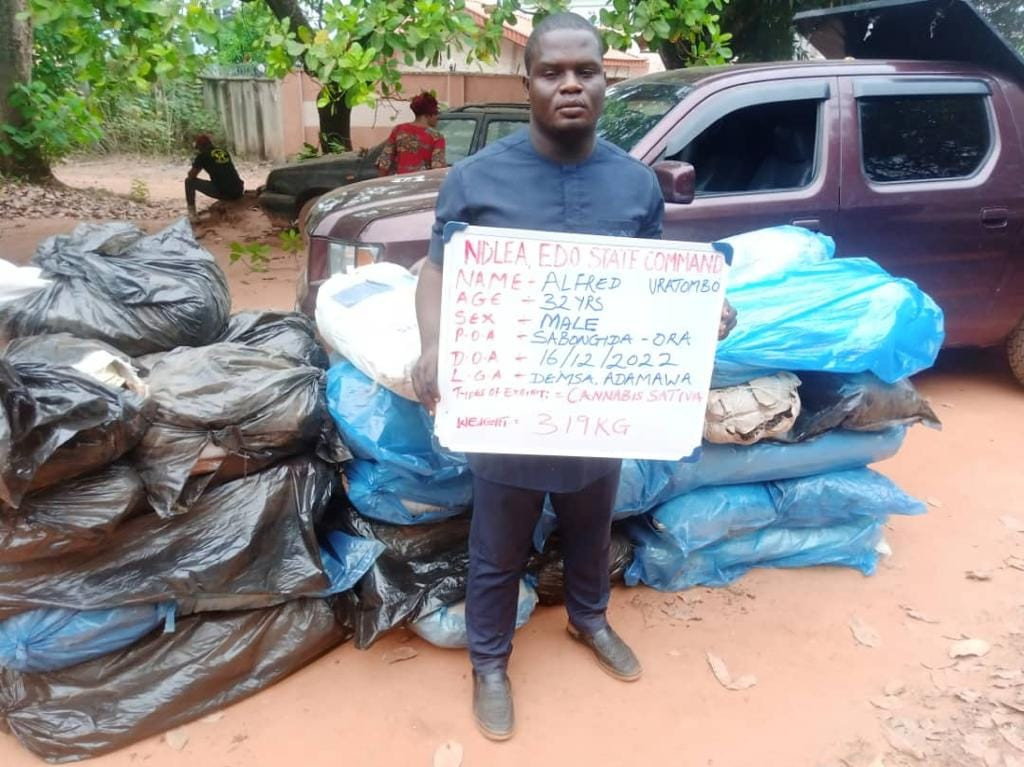 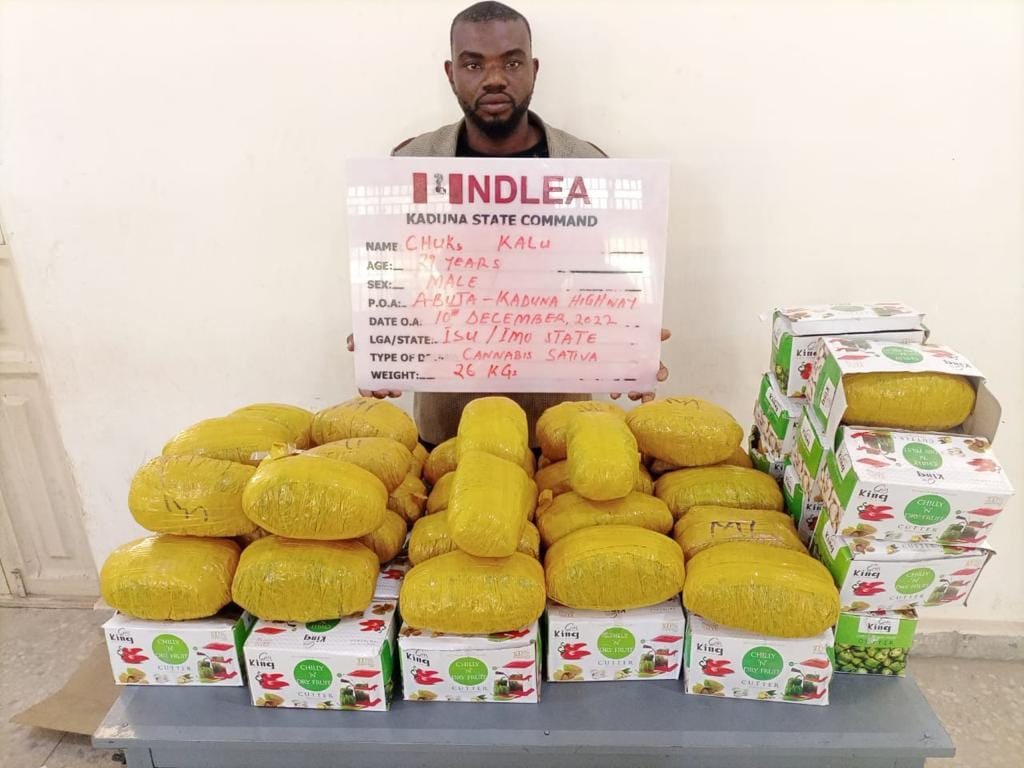