At the event, the organised labour presented the APC candidate with their demands which included a total war on corruption. 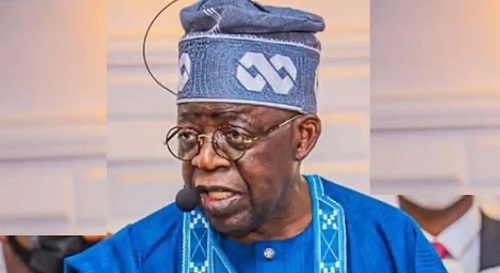 The All Progressives Congress presidential candidate, Asiwaju Bola Tinubu has met with leaders of the Nigerian Labour Congress and Trade Union Congress and others on Monday.
The APC candidate urged the labour leaders to support his presidential ambition.
At the event, the organised labour presented the APC candidate with their demands which included a total war on corruption.
Tinubu told the labour leaders that his antecedents as a former Lagos State governor, during which he transformed the state and powered it to the 5th largest economy in Africa, speak for him.
He listed unemployment, lack of credit system to allow workers to own houses, poverty, challenges in the educational sector, and weak industrial base of the economy as some of the issues he will tackle as the President.
“In my worldview, the government has a cardinal responsibility to work not only with business but also with labour to ensure that all constituent parts of our society are afforded their fair share of rewards without taking on undue hardship,” Tinubu said.
According to him, he has been in the forefront of fighting the government for good governance all his life when he was detained and eventually forced into exile.
The former Lagos governor narrated how he fought tooth and nail for democracy and went into exile at the peak of National Democratic Coalition movement against the military junta in the country.
He said, “As Organised Labour, you have been at the forefront of the worker’s rights movement in Nigeria, championing economic fairness and the welfare of the average person, the weak and the forgotten.
“You have also been involved in the struggle for democracy and political rights. Your collective efforts breathe life into the democratic rights and economic ideals enshrined in our constitution.
“I can speak fondly of your impact on our nation because of my personal history on the frontlines of the social justice movement.
“I may be running for president now, but I was not always in this position. Long before I started running for the presidency, I was running away from military dictators angered by my important role in protests against them and their efforts to vanquish our democratic aspirations.
“The defining moment of my public life came during Nigeria’s struggle for democracy and my membership in the National Democratic Coalition (NADECO) movement.
“I have dedicated my entire being to that cause. I was detained and then forced into exile because I refused to accept anything less than a government based on the proposition that the will of the people is sovereign and should reign over armed might and imposition.
“I believe that those assembled here today share the same ideals of progressive and democratic good governance. I have spent my political life advocating for the rights and interests of ordinary Nigerians as you also do. We have long been fellow travellers on the same road. I hope that we shall continue as friends and brothers.”
While appreciating Tinubu for his presence, the NLC President presented the workers’ charter of demands which include a total war on corruption.
According to him, corruption has almost destroyed the social and economic fabric of Nigeria across the private and public sectors and is a reason the country is not making the desired progress.
“In Nigeria, our problem is a people problem and we must have a government that will prioritise the fight against corruption. This is a key demand for Labour. We also need a government that will make social and economic justice a priority,” he said.
Top Stories