The unfortunate incident occurred when the parents of the kids locked them inside their one-room apartment to run errands in the neighbourhood. 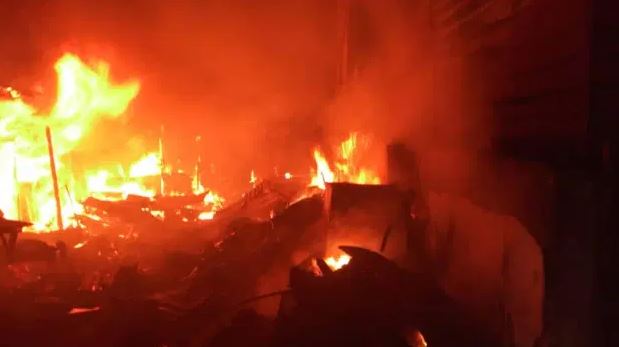 Two siblings aged 6 and 3, have been reportedly roasted to death at Udo Imuk street in Eket local government Area of Akwa Ibom State.

It was gathered that the incident occurred around 7:00pm on Friday, Dec. 30, when the parents of the kids locked them inside their one-room apartment to run errands in the neighbourhood.

A neighbour who spoke to journalists at the scene on Saturday, Dec. 31, said the cause of the inferno could not be ascertained. There was neither an electrical connection nor a candle or gas cylinder in the room that could have caused the inferno.

The father of the victims, Prince Ekpo said he left his phone in the room to give light to his children before going to take his injection as his wife had earlier gone to buy something at the neighbourhood.

He said upon his return he saw a crowd gathered around his house, and then he discovered that his apartment has been razed down and his two kids burnt to death.

"I came back and saw people crowded and discovered my two children were burnt dead and we don’t know the source of the fire," He said

The landlords, Bright and Godwin Peter Udo Imuk, told newsmen that they don't know the source of the fire.

They said: "We didn’t notice when the fire started, we only heard an explosive sound and while going to check, the fire had gutted the room and spread to our rooms and parlour, we tried to remove our properties, but serious damages had been done already.

"We called people to come and help us to quench the fire and I told my brother that children were inside the room and before we went for their rescue the children were roasted dead, our properties damaged."