Ukraine was believed to have stopped housing troops close together in single facilities after a deadly Russian missile strike on a base in western Ukraine in March which killed dozens. 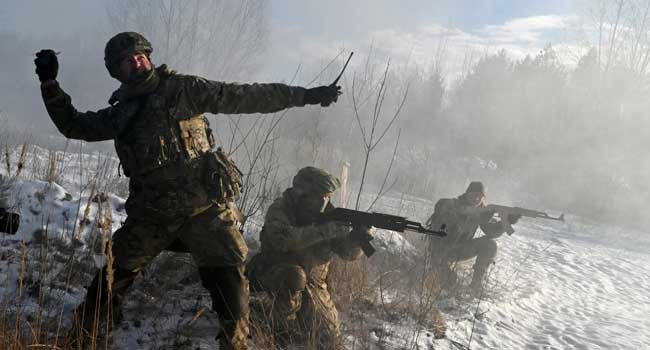 Ukraine said claims by Russia's defence ministry that it killed more than 600 Ukrainian servicemen are lies.
Russia had in a statement on Sunday, January 8, said the strike on the buildings in Kramatorsk was a revenge operation for the deadly Ukrainian attack last week on a Russian barracks in Makiivka, in part of the Donetsk region controlled by Moscow's forces, in which at least 89 servicemen were killed.
The statement said Moscow had used what it called reliable intelligence to target the Ukrainian troops. More than 700 Ukrainian troops had been housed in one hostel and more than 600 in another, it said.
"As a result of a massive missile strike on these temporary deployment points of Ukrainian army units, more than 600 Ukrainian servicemen were destroyed," the defence ministry said.
If true, it would be the single largest loss of Ukrainian troops since Russia invaded on Feb. 24 last year.
Ukraine was believed to have stopped housing troops close together in single facilities after a deadly Russian missile strike on a base in western Ukraine in March which killed dozens.
Ukraine has dismissed the statement, calling it lies.
Also a Reuters reporter said on Sunday that the Russian missile attack on the Ukrainian city of Kramatorsk missed its targets as there were no obvious signs of casualties.
The Reuters team reportedly visited two college dormitories that Moscow said had been temporarily housing Ukrainian personnel.
But neither dormitory in the eastern city of Kramatorsk appeared to have been directly hit or seriously damaged. There were no obvious signs that soldiers had been living there and no sign of bodies or traces of blood.
Serhiy Cherevatyi, a Ukrainian military spokesperson for the eastern region, described the claim of mass casualties as an attempt by the Russian defence ministry to show it had responded forcefully to Ukraine's recent strikes on Russian soldiers.
"This is an information operation of the Russian defense ministry," Cherevatyi told Ukrainian broadcaster Suspilne News.
The Russian statement named two buildings, the dormitory of a site called College No.47 and a dormitory affiliated with College No.28, both in Kramatorsk.
Photographs by Reuters showed some of the windows broken at the College No.47 dormitory. There was a large crater in the courtyard. The windows of the nearby college had been smashed.
The College No.28 dormitory was entirely intact. A crater lay about 50 metres away from it closer to some garages. Some of the college's windows were smashed.
"It was very loud, it threw people out of their beds. Some people hurt their fingers because of the blast wave," said Polina, 74, a resident who lives across from one of the dormitories.
"There was an explosion, and then another explosion. The windows shook... Really, there's nothing else to tell you. Just a normal day," said Mykhailo, a 41-year-old resident.
Kramatorsk's mayor earlier said there had been no casualties.
As Moscow's invasion of Ukraine grinds towards the one-year mark, Russia's military is under domestic pressure for battlefield successes.
Top Stories