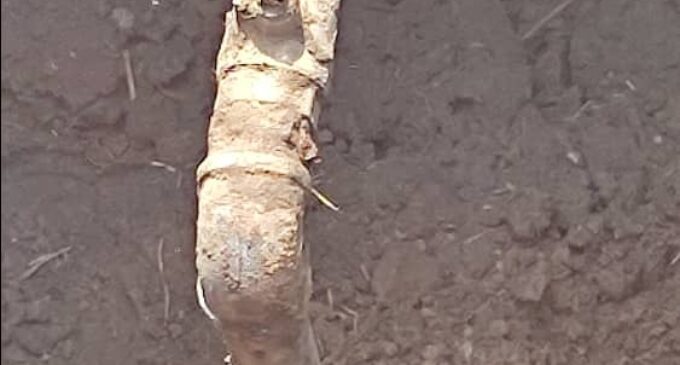 An illegal tapping point on the Trans Niger Pipeline (TNP) has been uncovered in the Nonwa Uedume community of Tai local government area, Rivers state.

Others present at the site include security operatives of the Nigerian army, officers of the Department of State Services (DSS), Tai local security taskforce and pipeline surveillance contractors.

Speaking on the incident, Fyneface Dumnamene Fyneface, executive director, Youths and Environmental Advocacy Centre (YEAC-Nigeria), in a statement seen by TheCable, condemned the act by the illegal oil refiners.

Fyneface said employees of Shell Petroleum Development Company (SPDC), operator of TNP, were performing routine maintenance work on the pipeline at the time of the discovery, as the tapping point was near their site.

He said the workers “were surprised that a tapping point on their pipeline was close to where they were but they did not know”.

“After the exposure, they took over the point, working to remove the tapping of about one and half inches pipe said to have been operated for over seven years with capacity to load two tankers of 33,000 liters per night,” Fyneface said.

‘COLLABORATION SHOULD BE INTENSIFIED TO CLAMP DOWN ON OIL THEFT’

On his part, Okpe, speaking to journalists at the site, said the discovery of the illegal connection on the facility, cost a lot of resources.

He said the illegal connection was discovered following a tip-off, calling for a collaboration between his team and the government.

“This discovery cost me money to get the intel (information) and this access. That does not mean that Shell does not have operators that are doing surveillance for them,” he said.

“The federal government also has companies doing surveillance for them. I need to partner with them. I called Shell after I discovered this on their line.

“I wish they would come so that we can jointly collaborate to clamp down on it. It is not only discovering it but also closing it so that it doesn’t recur. Since then, Shell has not come. It is part of the problem I have been having with them.”

Okpe also said some illegal oil bunkering activities are still ongoing as preliminary findings indicated that there may be more of such illegal camps in the area.

He also accused Shell of not taking responsibility despite discovering the illegal pipeline.

“As I speak with you, there are a lot of bunkering operations going on in some of the communities around here. Even when I discovered it and I called them (Shell) to come let us collaborate. It is their asset, not mine,” Okpe said.

“I cannot risk my resources and my personnel in discovering this, at the end of the day the owners are not coming forward to take responsibility.

“This thing you are seeing happening here, if anybody tells you that the larger number of the population here are not aware of it, it is a lie.

“If you go beyond here to the far end, you will see another spot like this. So, how are we responding to it to ensure that people who are doing this thing will know that there are owners and the owners are protecting their property?’’

At the time of filing this report, Shell Petroleum Development Company (SPDC) did not respond to a request for comments.