The babies – two boys and five girls – were delivered at the Obijackson Women and Children hospital, Okija, in Ihiala Local Government Area on Sunday. 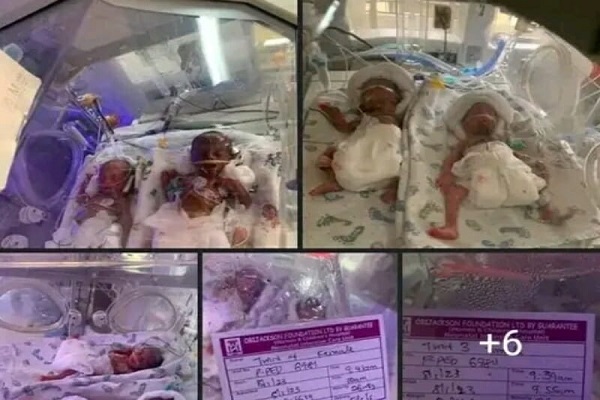 Mrs. Uzodike Ngozi, a lecturer in the Department of Business Administration, Nnamdi Azikiwe University (UNIZIK) Awka Anambra State, has been delivered of sextuplets on Sunday.

The babies – two boys and five girls – were delivered at the Obijackson Women and Children hospital, Okija, in Ihiala Local Government Area on Sunday.

However, the joy may be short-lived as the hospital is threatening to stop medication on the remaining six babies if the parents fail to pay the N19 million.

The mother has however not been paid any salary since she was engaged in 2020.

The husband, Celestine Uzodike, who spoke to the nation in tears, said the joy has turned into pains as they could only pay N1.6 million of the N19 million billed by the hospital.

He appealed to governments, corporate organisations and individuals to come to their aid as they had already lost one of the babies.

Uzodike hails from Omogho, in Orumba North Local Government Area, and is a junior aide to Governor Chukwuma Soludo.

He lamented that his wife, despite being properly engaged as a lecturer, had never earned a kobo as salary. Even after her promotion to Lecturer II.

The new mother added: “All I want is for philanthropists to come to our aid so we can offset the N19 million hospital bill.”

Healthcare Manager of the hospital, Chika Ndu-Okonkwo, told The Nation that they were excited about the delivery, but said the N19 million bill was because each of the babies would stay up to six-eight weeks in the hospital, and gulp around N3 million as they weighed only 1kg each.

Acting Public Relations Officer of UNIZIK, Mrs. Chika Ene, said she could not speak where she was at the moment. The Vice Chancellor, Prof. Charles Esimone, could not be reached also.