The alleged executioner, following her arrest in Imo State, had reportedly confessed to killing five persons so far. 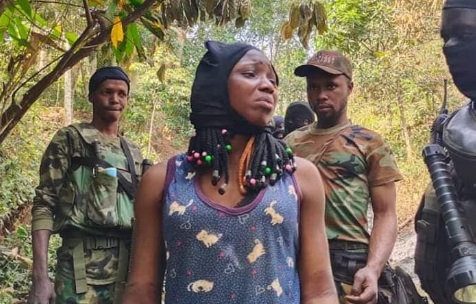 The Indigenous People of Biafra has reacted to reports by the Nigerian Army that it arrested a female member of its security outfit the Eastern Security Network.
The 22-year-old alleged female executioner, identified as Amaka Onah was arrested by the Nigerian Army and labelled a member of IPOB’s military outfit, ESN.
The alleged executioner, following her arrest in Imo State, had reportedly confessed to killing five persons so far.
But in a statement by IPOB spokesman, Emma Powerful, on Thursday, the secessionist group maintained that Onah was not a member of ESN, alleging that her arrest and confession was a ploy to discredit the group.
The statement partly read, “From the so-called confessional statement of the purported female executioner, she claimed to have joined ESN four months ago, shows that she was handed a very poor script because IPoB stopped the recruitment of ESN operatives since 2020 before our leader formally inaugurated ESN in December 2020.
“After the inauguration, there has not been any recruitment of new ESN operatives. IPoB has announced severally via Radio Biafra, Press releases and other media outlets that it has stopped recruitment of new operatives into ESN.”
Describing the scenario as a “Nollywood movie”, IPOB stated that it will not be intimidated.
“Nigerian government should know by now that IPoB can neither be blackmailed nor be intimidated by the ‘Nollywood’ movies they are acting because they are very predictable and we know their game plans even before they execute them,” the statement added.
Top Stories