CONUA, a rival union of university lecturers, which parted from the Academic Staff Union of Universities. 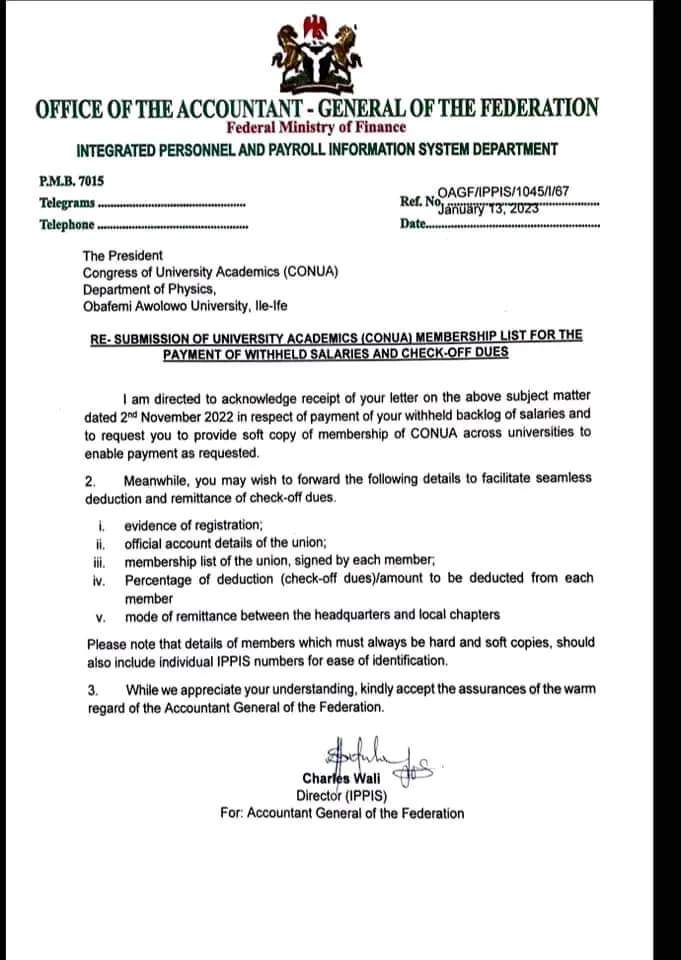 The Federal Government is on the verge of paying members of the Congress of University Academics withheld salaries, according to a report by Punch.
This is as FG through the Office of the Accountant General of the Federation has requested their details for payment, the report stated.
CONUA, a rival union of university lecturers, which parted from the Academic Staff Union of Universities, had in December 2022, threatened to drag the Federal Government to court over the withheld salaries of its members, as it maintained that its members were not part of the eight months ASUU strike, which lasted from February to October, 2022.
“The government knew that the union did not call for strike action and its members were not involved in the strike action that lasted for eight months and which shut down the university system nationwide.
“In the letter, we made it clear that because CONUA constituted a separate and independent union in the university system, our members did not call for any strike. This was followed by a press conference in Abuja on August 19, 2022 at which it was categorically stated that CONUA was not part of any ongoing strike, and that the ‘No Work No Pay’ principle ought not to apply to members of the union,” CONUA statement in December partly read.
The circular, obtained by The PUNCH, signed on behalf of the AGF by the Director, Integrated Payroll and Personnel Information System, Charles Wali, addressed to the CONUA president, Dr Niyi Sunmonu, was dated January 13, 2022.
The letter read, “I am directed to acknowledge receipt of your letter on the above subject matter dated November 2, 2022 in respect of payment of your withheld backlog of salaries and to request you to provide soft copy of membership of CONUA across universities to enable payment as requested.
“Meanwhile, you may wish to forward the following details to facilitate seamless deduction and remittance of check-off dues: Evidence of registration; official account details of the union; membership list of the union, signed by each member; percentage of deduction (check-off dues)/amount to be deducted from each member; mode of remittance between the headquarters and local chapters.”
Wali added that the details of members which must always be hard and soft copies, should also include individual IPPIS numbers for ease of identification.
The PUNCH reports that upon the suspension of ASUU’s eight-month strike, the FG had paid the lecturers on pro-rata basis, as the Minister of Labour and Employment, Dr Chris Ngige, maintained that the government could not pay for a job not done.
ASUU members across universities have since then been protesting the “no-work-no-pay” policy, even as the union says it will consider “appropriate options” to further press home its demands.
Top Stories