Makinde had since September 23, 2020, leased the shopping complex to Whitestone Global Limited for 50 years and promised to complete the renovation before May 2023. 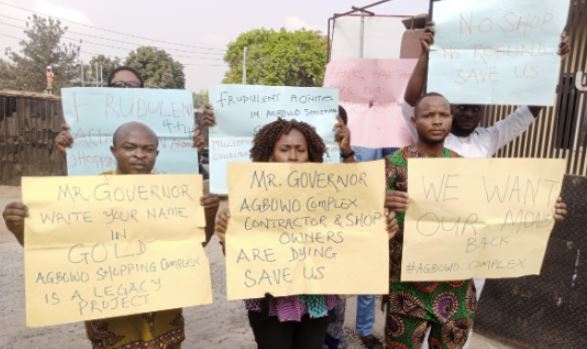 Major suppliers, sub-contractors, and occupants of shops at the ongoing reconstruction of the N4.9 billion popular Agbowo Shopping Complex in Ibadan, Oyo State, have again pleaded with the state governor, Seyi Makinde, to prevail on the contractors handling the project to pay them off.

The PUNCH reported that Makinde had since September 23, 2020, leased the shopping complex to Whitestone Global Limited for 50 years and promised to complete the renovation before May 2023.

The governor also stated that the structure, which many successive governments had left untouched, would see the investor injecting a sum of N4.9 billion to convert the moribund edifice into premium commercial real estate and a four-star hotel.

Staging a protest at the state secretariat of the Nigeria Union of Journalists, on Friday in Ibadan, the suppliers of materials and sub-contractors lamented non-payment of over N250 million since two years ago.

Addressing newsmen through their representatives, Adeleke Dagunduro, Bolanle Shokunbi and Mark Ayobami, the protesters said the project was executed through bank loans and many of their property had been seized for non-payment of the loans.

Dagunduro, a sub-contractor, said, “The challenge now is that the money we committed to this project was borrowed. We borrowed the money and we don’t want to engage in litigation because we are looking at the future prospect, that’s why we are making efforts to ensure that they pay us.

“Before the project was suspended, the contractors kept promising us to pay based on our agreement. We have gone to many places and no response. Governor Seyi Makinde should help us.”

Shokunbi, a supplier, said, “When I discovered that the governor was involved in the project, I applied believing that I will get my money in time. They told me to supply 20 trucks of stone burst, 30 tons of it and they gave us the LPO to that effect that four weeks after delivery, they would pay. The payment has turned to two years.”

Ayobami also said he saw governor’s banner which prompted him to apply for a shop place.

“I went to Agbowo area and saw Makinde’s poster being a governor planning to renovate the complex, that prompted me to bid for it. They asked us to pay N2 million for a year and we are to pay for three years and balance before the completion of the project. As we speak, the project is yet to be completed. We are appealing to the governor, Makinde, to help us,” he lamented.