If the latest report is anything to go by, then the circumstances that led to John Obi Mikel's emergence as Super Eagles skipper isn't as transparent as many thought. 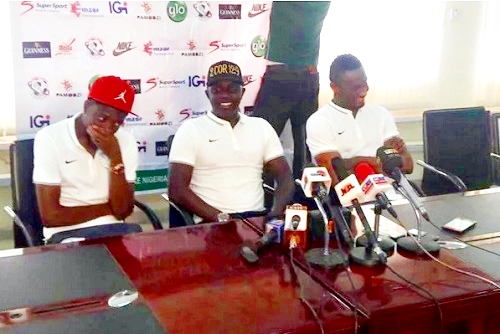 Musa, Coach Siasia and Mikel at a press conference during the announcement in Kaduna
According to an exclusive report on AfricanFootball.com, Super Eagles midfielder, John Mikel Obi, actually insisted he will only feature in the AFCON qualifiers against Egypt if he is made the team's captain, as coach Samson Siasia and top officials thereafter pressured Ahmed Musa to relinquish the armband.
It was gathered that the Chelsea midfielder demanded the Eagles captaincy when he spoke with caretaker coach, Siasia prior to the matches against Egypt.
A top source who disclosed to the publication said, "Mikel made it very clear to Siasia he be made captain if the coach wanted him to play the crucial matches against Egypt."
Pressure was thereafter mounted on Ahmed Musa to surrender the Eagles captaincy to Mikel who was assistant captain to Vincent Enyeama when former coach, Sunday Oliseh picked Musa as captain last October.
It was gathered that a top official of the Nigeria Football Federation (NFF) advised Ahmed Musa 'to give them their captaincy.' Afterwards, Siasia later held a private meeting with Musa in his hotel room in Kaduna on the same matter.
"The meeting was for 30, 40 minutes, just Siasia and Ahmed. And it was in that meeting that it was made clear to the player to give up the captaincy," a top source said.
Immediately after this closed-door meeting, the coach and the players headed to the press conference where Musa announced Mikel as new Eagles skipper while accepting that there was 'a mix-up'  when more senior players were overlooked for the leadership of the team.
Musa had said in the press conference before relinquishing the armband: "Mikel is my senior and a big brother. So, Mikel is the captain, not me."
Top Stories