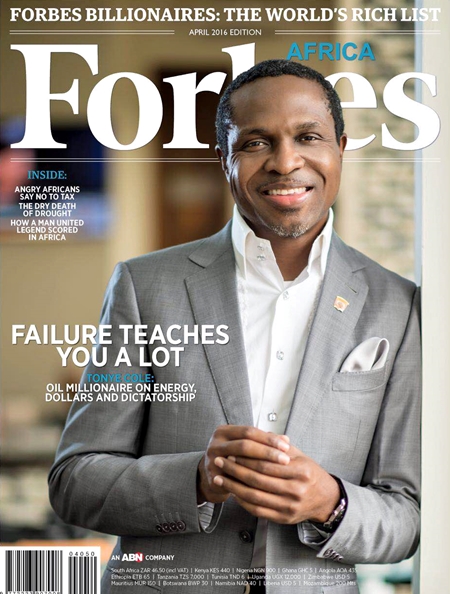 In its April edition, popular business magazine, Forbes Africa, has featured oil mogul, Tonye Cole, the co-founder and Group Executive Director of Sahara Group - a leading privately owned Power, Energy, Gas and Infrastructure Conglomerate with operating companies active in the downstream, midstream, upstream, infrastructure and power sectors.
In the exclusive interview with Forbes Africa correspondent for West Africa, Peace Hyde, Tonye Cole shares his journey overcoming bankruptcy as a young man to establishing the leading indigenous oil conglomerate, Sahara Group. The company celebrates its 20th anniversary, which has seen it establish the corporate social responsibility arm, Sahara Foundation impacting lives all over Africa.
"Failure teaches you a lot. If you are an entrepreneur, you are going to have bad days and if you are a successful entrepreneur, you are going to have even more bad days. It is important to remember the value of relationships and never give up," Says Cole in the exclusive cover interview.
Watch the exciting behind-the-scenes footage and the interview below;
Top Stories

Affiliate Marketing - Who Is It Right For And Where To Start