The first ever religious amusement park has been launched and it sees amazing biblical events come alive. 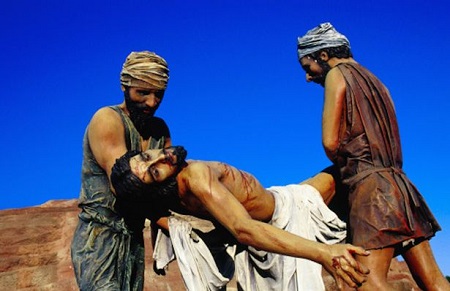 Statue with Christian religious theme at Tierra Santa religious theme park, Costanera Norte
Disneyland has Mickey and Minnie, The Wizarding World of Harry Potter has well, Harry Potter, and the Holy Land has Jesus Christ.
Yes, that's right, Holy Land, the world's first religious theme park where you can watch the son of God rise more regularly than the actual sun and where there are dozens of bible themed attractions.
As well as churches is also a mosque and synagogue and life-size statues of leading religious figures, including Mother Teresa and Pope John Paul II.
There is even a depiction of the crucifixion. 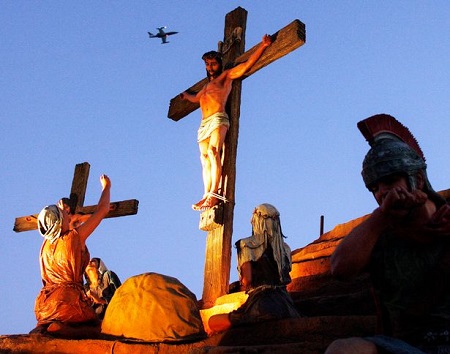 Life-size statues are seen in the recreation of the hill of Golgotha where Jesus was crucified at Tierra Santa (Holy Land)
There is a 20-minute show called "Genesis" where an animatronic Adam and Eve and a Noah’s ark of animals tell the story of the creation of the universe.
It's not all Christianity as there is a place for Judaism and Islam int he inclusive atmosphere in Buenos Aires, Argentina.
Dubbed ‘Christianity’s answer to Disneyworld’, the park opened 15 years ago when Jorge Mario Bergoglio, now Pope Francis , the first Latin American pontiff, was the local Archbishop. 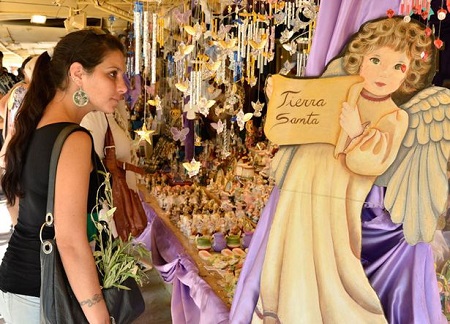 Tierra Santa is dedicated to the key moments in the life of Christ and is the first religious theme park in Latin America.
Among the bible-themed attractions are a miniature model of the Last Supper and a giant Jesus.
But the highlight apparently is the Resurrection where hundreds of visitors watch a 12-metre high statue of Jesus rise to a sound track of are by Handel fom behind a tall rock. 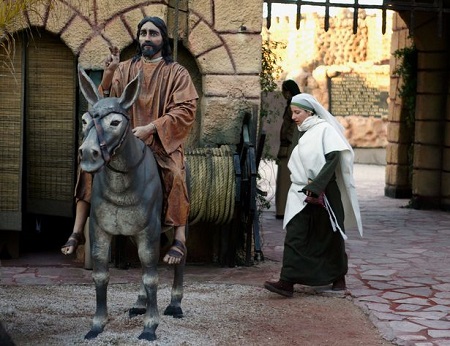 A woman walks past a life-size statue of Jesus Christ riding a donkey in Tierra Santa.
The rather tatty looking statue makes a brief blinking appearance crosses itself and as the chorus of “Hallelujah!” rings out.
On it's website the theme park's bosses boast: "The Ark, the Workshop of Galilee, the carpentry of Joseph and the House of Puppetry, are ideal choices for the kids.
"You can also visit The Creation, the Nativity, the Last Supper and the Resurrection, with notable performances of the Wailing Wall, the Roman Palace and the Virgin Cave." 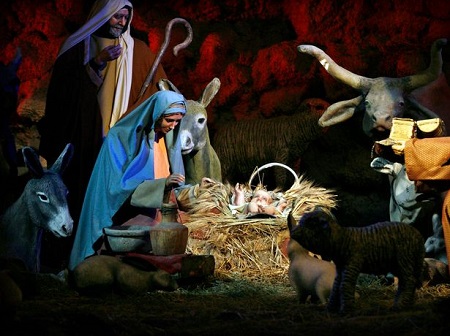 Life-size statues of the Holy Family at the theme park which draws visitors from across Argentina and Uruguay, Brazil, Chile, Paraguay, and Bolivia
However not everyone is a fan with Lonely Planet saying : "Even respectful, devout Catholics will find this – the ‘world’s first religious theme park’ – a very tacky place.
"It boasts animatronic dioramas of Adam and Eve and the Last Supper, but its pièce de résistance is a giant Jesus rising from a fake mountain – aka the resurrection – every half-hour."
- Mirror Online
Top Stories

Photo Of Man Who Allegedly Stole Keke Napep And Sold It At N23,000 In Ogun
Recent Stories