Former President Olusegun Obasanjo has blasted the National Assembly, describing it as a den of corruption, which is occupied by unarmed robbers. 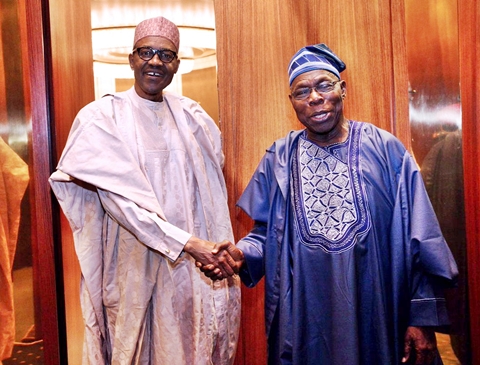 Obasanjo & Buhari
Speaking during the First Akintola Williams annual lecture in Lagos on Wednesday, former President Olusegun Obasanjo, launched a fresh attack on the National Assembly, describing it as a “den of corruption”, which is occupied by “unarmed robbers”.
The ex-president who recommended that the ongoing President Buhari's anti-corruption was in the judiciary be extended to the legislative arm of government, said the corruption in Nigeria’s parliament “stinks to high heavens”.
“If the judiciary is being cleaned, what of the national assembly which stinks much worse than the judiciary?” he asked.
“The national assembly cabal of today is worse than any cabal that anybody may find anywhere in our national governance system at any time. Members of the national assembly pay themselves allowances for staff and offices they do not have or maintain.
“Once you are a member, you are co-opted and your mouth is stuffed with rottenness and corruption that you cannot opt out as you go home with not less than N15 million a month for a senator and N10 million a month for a member of the house of representatives. The national assembly is a den of corruption by a gang of unarmed robbers.
“Most of them conduct themselves and believe that they are not answerable to anybody. They are blatant in their misbehaviour, cavalier in their misconduct and arrogant in the misuse of parliamentary immunity as a shield against reprisals for their irresponsible acts of malfeasance and/or outright banditry.”
Obasanjo wondered why the legislative arm of government had chosen not to be transparent with the nation’s budget, and also condemned the “gang up against the whistleblower”, obviously making reference to Abdulmumin Jibrin, former chairman of the house of reps appropriation committee.
According to TheCable News, he appealed to President Muhammadu Buhari to intervene, and purged the parliament of corruption.
“Budget padding must not go unpunished. It is a reality, which is a regular and systemic practice. Nobody should pull wool over the eyes of Nigerians.
“Ganging up to intimidate and threaten the life of whistle blower is deplorable and undemocratic. What of the so-called constituency projects which is a veritable source of corruption? These constituency projects are spread over the budget for members of the national assembly for which they are the initiators and the contractors directly or by proxy and money would be fully drawn with the project only partially executed or not executed at all.
“The national assembly budget process is not only carried out in opaque and corruptive manner but also in grossly unconstitutional manner. Hence, our lawmakers are lawbreakers. They are the accused, the prosecutor, the defenders and the judge in their own case.
“We should not continue to live with the impunity and corruption of the national assembly. Yes, I believe that something can and should be done. The president should ride on the crest of the popularity of what is happening in the judiciary to set up a highly technical team of incorruptible investigators to look into the so-called constituency projects of the past and the present and bring culprits to book.
"The president has overall responsibility and accountability for any fund appropriated under his watch. There would be many of such projects and the national assembly would try to frustrate such necessary investigation. But the project sites are known and magnitude of funds voted for them are known. The investigation will reveal the true situation,” he said.
Top Stories