The alleged promotion of immorality and n*dity by the ongoing Big Brother Nigeria reality show has attracted the responses of Nigerians in the media and entertainment industry.

Some of the romantic scenes on BB Naija
With just 24hrs after the scathing piece of Tori News correspondent - Osayimwen Osahon George on the questionable operations of the popular television reality show, BB Naija, the Operations Manager at WE TV, Wazobia TV, Gochu Enwereji has dropped his intellectual and cogent view on the flagrant display of amoral acts by contestants jostling for a N25 million cash prize within a period of 90 days in confinement.
The Tori News correspondent in his piece titled "Refined Pornography: The Shame of Watching Big Brother Naija" accused MultiChoice Nigeria of corrupting the young and innocent minds in the society by apparently permitting acts of indiscriminate romance, drinking and vulgar talks by contestants during the reality show.
Mr Enwereji in his Facebook post has taken a jab at Nigerians as a whole with a statistical report of viewership of the BB Naija as against an educative school competition that has been neglected by the public for seeming ephemeral acts of romance on the contentious reality show.
He described Nigerians as "hypocrites" who have acted without due representation of the teachings of their religions be it Islam or Christianity.
Read his interesting post below: 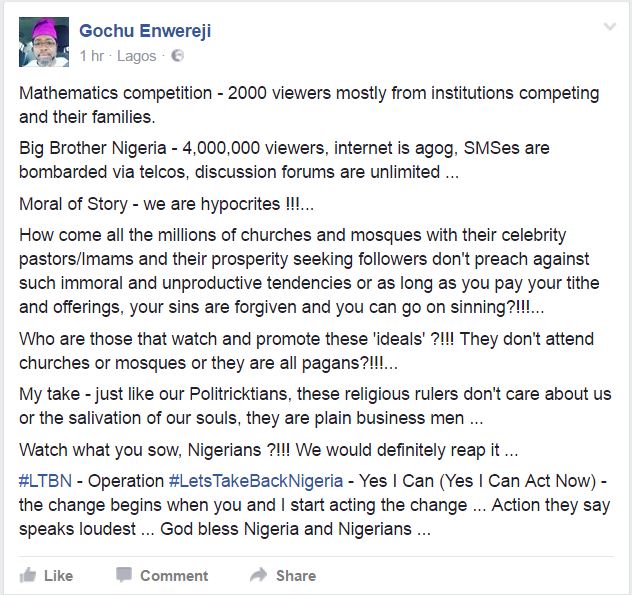