The outspoken and action governor of Ekiti State who is also the chairman of the Peoples Democratic Party (PDP) Governor's Forum, has declared Wednesday, 8th March, a public holiday in his state. 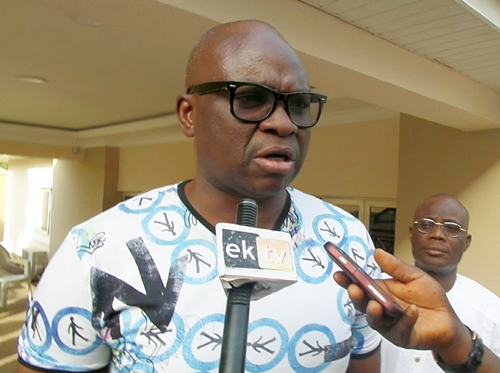 Gov. Fayose
Governor Ayo Fayose of Ekiti State has declared March 8 as work free day in commemoration of the 2017 International Women’s Day.
The Chief Press Secretary to the governor, Mr Idowu Adelusi told journalists in Ado Ekiti on Tuesday that  Fayose declared the holidy to allow the full participation of women in the celebration planned for the Oluyemi Kayode Stadium on Wednesday.
According to him, the holiday will also enable men wishing to identify with the womenfolk, the opportunity to do so without hindrance.
He said the state government would sponsor the event to enable the women showcase their potentials and had a sense of belonging in the society.
NAN reports that no fewer than 45,000 women  across various professions, trades as well as those in the public service have already enlisted to be part of the women’s special event.
The women have also paid N500 each to buy a branded and subsidised Ankara, which has a  market value of N3,500.
NAN Correspondent who visited the Oluyemi Kayode Stadium, venue of the event reports that the place is now wearing a new look in preparation for tomorrow.
-NAN
Top Stories