2019 Elections: See How Much Presidential Nomination Forms Would Now Cost


The Nigerian Senate has finally reviewed the electoral laws of Nigeria correcting the errors that has been a problem in the past. 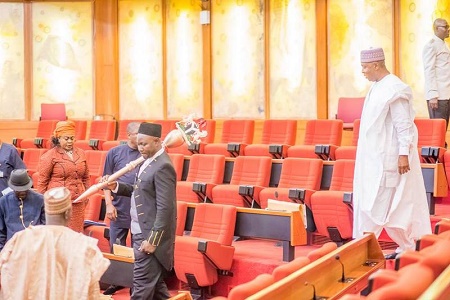 The Nigerian Senate
The Senate has passed the Electoral Act No 6 2010 (Amendment) Bill 2017 after much consideration to correct some of the errors observed in the Act. The amended bill which the Senate passed on March 30, when signed into law will abolish arbitrary fees for nomination forms fixed by political parties.
The parties had been in control of the nomination fees, hiking it as they please. But, all that has now been corrected.
President Muhammadu Buhari had in the past claimed that he borrowed money to pay for his nomination form which cost N25 Million, in the build up to the 2015 general elections. The Senate has put an end to the abuse by political parties by putting a N10 Million limit on the forms.
HERE ARE 17 HIGHLIGHTS OF THE BILL AS COMPILED BY DAILYPOST.
– It stipulates that “there shall now be full biometric accreditation of voters with smart card readers and/or other technological devices, as INEC may introduce for elections from time to time”.
– It provides that “presiding officers must now instantly transmit accreditation data and results from polling units to various collation centres. Presiding officer who contravene this shall be imprisoned for at least five years (no option of fine)”.
– It states that “all presiding officer must now first record accreditation data and polling results on INEC’s prescribed forms before transmitting them. The data/result recorded must be the same with what they transmitted”.
– INEC now has unfettered powers to conduct elections by electronic voting. Besides manual registers, INEC is now mandated to keep electronic registers of voters.
– INEC is now mandated to publish voters’ registers on its official website(s) for public scrutiny at least 30 days before a general election and any INEC staff that is responsible for this but fails to act as prescribed shall be liable on conviction to six months’ imprisonment.
– INEC is now mandated to keep a national electronic register of election results as a distinct database or repository of polling unit by polling unit results for all elections conducted by INEC.
Collation of election result is now mainly electronic, as transmitted unit results will help to determine final results on real time basis.
– INEC is now mandated to record details of electoral materials – quantities, serial numbers used to conduct elections (for proper tracking).
– A political party whose candidate dies after commencement of an election and before the declaration of the result of that election now has a 14-day window to conduct a fresh primary in order for INEC to conduct a fresh election within 21 days of the death of the party’s candidate.
- Political parties’ polling agents are now entitled to inspect originals of electoral materials before commencement of election and any presiding officer who violates this provision of the law shall be imprisoned for at least one year.
– No political party can impose qualification/disqualification criteria, measures or conditions on any Nigerian for the purpose of nomination for elective offices, except as provided in the 1999 constitution.
– The election of a winner of an election can no longer be challenged on grounds of qualification, if he, the (winner) satisfied the applicable requirements of sections 65, 106, 131 or 177 of the Constitution of the Federal Republic of Nigeria, 1999 (as amended), and he is not, as may be applicable, in breach of sections 66, 107, 137 or 182 of the Constitution of the Federal Republic of Nigeria, 1999. (For example, a person’s election cannot be challenged on the grounds that he did not pay tax, as this is not a qualifying condition under the constitution.)
– All members of political parties are now eligible to determine the ad-hoc delegates to elect candidates of parties in indirect primaries. The capacity of party executives to unduly influence or rig party primaries has been reasonably curtailed, if not totally removed.
Parties can no longer impose arbitrary nomination fees on political aspirants. The bill passed prescribes limits for each elective office as follows:
(a) N150, 000 for a ward councillorship aspirant in the FCT;
(b) N250, 000 for an area council chairmanship aspirant in the FCT;
(c) N500, 000 for a house of assembly aspirant;
(d) N1, 000, 000 for a house of representatives aspirant;
(e) N2, 000, 000 for a senatorial aspirant;
(f) N5, 000, 000) for a governorship aspirant; and
(g) N10, 000, 000) for a presidential aspirant.
– Relying on the powers of the national assembly in Paragraph 11 of Part II (Concurrent Legislative List) of the Second Schedule (Legislative Powers) to the Constitution of the Federal Republic of Nigeria, 1999 (as amended), the senate also passed measures reforming procedures regulating local government elections. State independent electoral commissions can no longer conduct elections that do not meet minimum standards of credibility.
Also, any INEC official who disobeys a tribunal order for inspection of electoral materials shall be imprisoned for two years, without an option of a fine.
Top Stories