Omg! See What Happened to a Man After He Slapped the Wife of Police Officer (Photo)


A bike man gotten more than he bargained for after he allegedly slapped the wife of a police officer on the streets of Calabar. 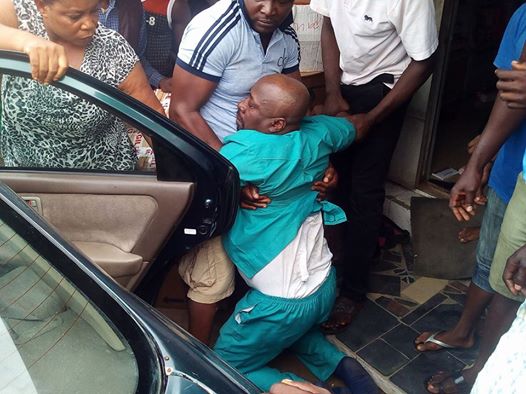 The man who slapped the policeman's wife pretending to have faiinted during his arrest
A man has landed himself in serious trouble after he slapped the hell out of the wife of a police officer who was doing her morning jogging.
Okon Otoyo who reported the incident said that the police officer's wife was jogging that early morning when the man blocked the road with his bike.
When she asked him to make way for her to pass, a disagreement ensued resulting in the man giving the woman a hot slap.
However, things didn't end there as the woman informed the husband who retaliated. Things took a twist when the man who slapped the policeman's wife began pretending to have fainted after the police officer tried to arrest him. The incident happened in Calabar.
Okon Otoyo wrote:
"The man in the picture was riding a bike when he slapped a woman begging him to make way for her to pass since she was doing morning jogging to keep fit, this man instead of heeding to her plea, slapped the woman as if she robbed him.
The aftermath: he is now being dragged by the husband to the woman who is also an official of the Nigerian police force. The film don turn sawa, he is now pretending, fainting etc.
Moral lesson: please, be careful the way you think and regard woman or human being for God sake. Such might turn out to be that big block you will never think should come your way at any time."
Top Stories