A drunk man has suffered a really tragic misfortune after mistaking his room's window for the toilet door and falling off. 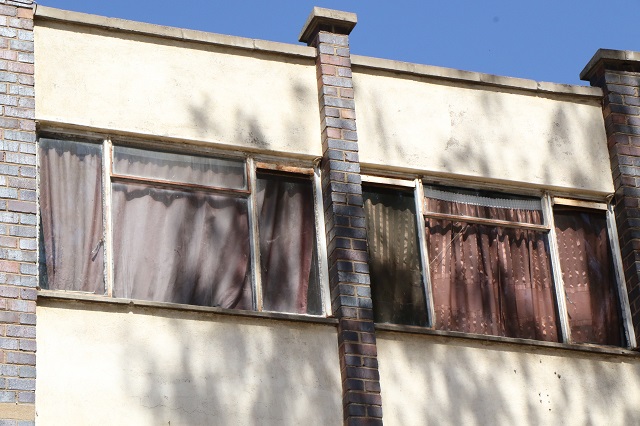 The man fell off from this window
Mr Alfred Ndlovu, a 58-year-old Zimbabwean man is battling for life in hospital after he mistook a window for a toilet door on the second floor of Bulawayo’s Vundu Flats and plunged about 10 metres to the ground.
According to The Chronicle, Mr Alfred Ndlovu of Plot 8 in Mangwe District who is suspected to have been in a drunken stupor, allegedly stepped out of a sitting room window at the block of flats in Makokoba suburb and fell to the ground.
He had announced to his drinking mate that he was going to the toilet.
Mr Ndlovu sustained serious head and body injuries and was rushed to Mpilo Central Hospital where he is admitted to the Intensive Care Unit.
The incident happened around midnight on Thursday.
Mr Ndlovu had been drinking with his relative only identified as Mr Mhlanga whom he normally visits from Mangwe.
Bulawayo Metropolitan Province police spokesperson Inspector Precious Simango confirmed the incident.
She said Mr Ndlovu allegedly jumped through a window and sustained serious injuries.
“He was drinking and when he wanted to visit the toilet, he mistook the sitting room window for a toilet door and fell off from the second floor. He is admitted to Mpilo Central Hospital where he is being treated.”
Inspector Simango warned members of the public not to drink excessively to avoid such incidents.
A resident who spoke on condition of anonymity at the block of flats, said Mr Ndlovu was a frequent visitor at their place.
“We are not sure of the two men’s relationship but we have seen Ndlovu many times here at the flat. Usually when he comes around the two go out drinking.
“On this night, the two had been out drinking and when they arrived home, they continued to drink inside their apartment. We don’t know what exactly happened but we were informed that a drunken man had fallen out of a window.
“We were told that he wanted to go to the toilet when he mistook the window for the toilet door, resulting in him falling to the ground. He bled profusely from the head and was rushed to Mpilo Central Hospital,” she said.
The news crew failed to contact Mr Mhlanga as he was not at home.
Top Stories