Rice farmers in Nigeria can access an international grant as masssive was $600 million donated by Bill and Melinda Gates Foundation and other bodies to boost food security. 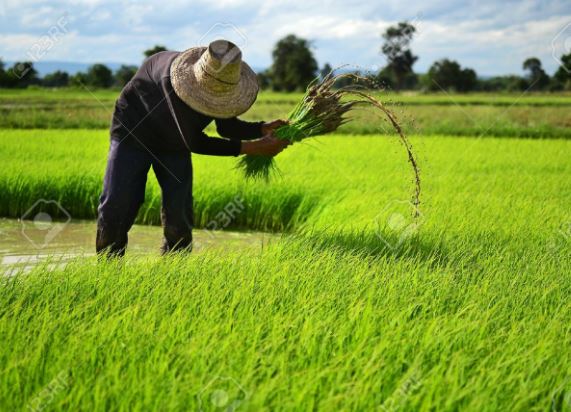 File Photo: A rice farmer
The Rice Farmers Association of Nigeria, says it is working to access the $30 billion agricultural grant contributed by Bill and Melinda Gates Foundation and other donor agencies for rice production in Africa.
The National President of the association, Alhaji Aminu Goronyo, told the News Agency of Nigeria in Abuja on Wednesday, that the association had submitted a template that would qualify it for the grant.
According to him, a team of experts from Geneva had met with the association on the grant, which Nigerian farmers can access as much as $600 million.
He said the visit was fallout of the Green Revolution Forum tagged `New Push for Africa’s Agricultural Transformation,’ held in September 2016 in Abidjan, Cote d’Ivoire, where the fund was pledged by various agencies.
He said the grant would cover various rice value chains including production, processing, packaging and marketing, and would assist the country attain self sufficiency in rice production.
Goronyo listed other partners that contributed to the fund to include Grow Africa and John Kufor Foundation.
“They said that Nigeria will get about 600 million dollars from the grant, it is going to be a partnership between RIFAN, government and the private sector.
“There is fear around the world that hunger will take over the world particularly Africa.
“That is why some agencies have decided to put their monies together to make sure that enough food is grown in Africa.
“That is why they want to bring the grant to Nigeria and other African countries so that we will be part of the beneficiaries toward achieving self sufficiency, particularly in rice.
“Although rice is mainly the key crop covered by the grant, other crops are still included in the grant,’’ he said.
Goronyo commended the CBN’s Anchor Borrowers Programme, saying it had assisted rice farmers across 26 states to improve production.
Bill and Melinda Gates Foundation had at the September 2016 in Cote d’Ivoire forum, pledged to commit five billion dollars to the fund while OCP Africa, a fertiliser firm, pledged $150 million dollars.
Top Stories