The management of JAMB in Makurdi, Benue state have been left in a state of disarray after a staff narrated how N36 million belonging to the government establishment disappeared. 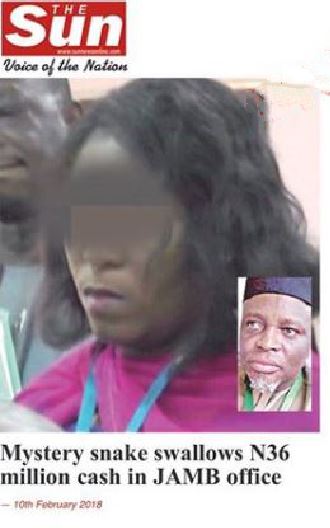 The JAMB staff narrated how the incident happened
A staff of the Joint Admissions and Matriculation Board, JAMB has narrated to the stunned management how a mystery snake swallowed a whopping N36 million proceeds from the sale of admission scratch cards in Makurdi, Benue state.
According to a report by Saturday Sun, the mystery snake was said to have sneaked into the account office of the Board in Makurdi, a number of time, and made away with the N36m. .
A sales clerk, Philomina Chieshe, told JAMB registrar and his team that she could not account for the N36m she made in previous years before the abolition of scratch cards. In the course of interrogation, Philomena denied the allegations that she stole the money.
She however confessed that it was her housemaid that connived with another JAMB staff, Joan Asen, to “spiritually” steal the money from the vault in the account office.
Philomina, in her confessional statement, said that Joan Asen and her accomplices confessed that they have been stealing the money “spiritually” through a mysterious snake that always sneak into the office to swallow the money from the vault.
According to her “It was a mystery to me too. I have been saving the money in the bank, but I found it difficult to account for it. So I started saving it in a vault in the office. But each time I open the vault, I will find nothing."
Top Stories