As controversy continues to trail the disappearance of N36million from the coffers of Nigeria's examination board, JAMB, the suspect has spoken to CNN, and tells her side of the story. 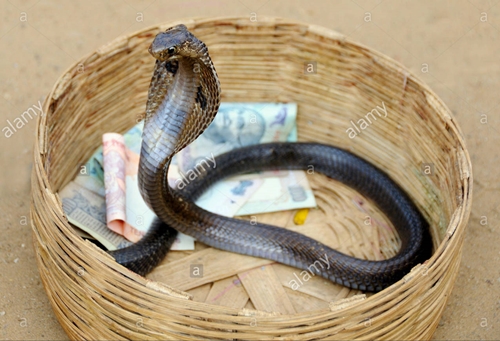 Snake in a basket (Image: Alamy)
A couple of days ago, a JAMB official in Benue state had shocked the public with a confession wherein she claimed a mysterious snake swallowed N36 million from the board’s office vault in Benue state.
The board’s official in the state, Mrs. Philomina Chieshe, a sales clerk, had accused her housemaid of colluding with another JAMB staff, Joan Asen, to “spiritually” steal the money from the vault in the accounts office through a spiritual snake.
Mrs. Chieshe, had made the startling confession when she was unable to account for N36 million she had made for the agency from the sale of scratch cards.
According to her, “It was a mystery to me too. I have been saving the money in the bank, but I found it difficult to account for it. So I started saving it in a vault in the office. But each time I open the vault, I will find nothing. I became worried and surprised how the millions of Naira could be disappearing from the vault.
“I began to interrogate everybody in the house and office, and no one could agree on what might have happened to the money. I continued to press until my housemaid confessed. She said that the money disappeared spiritually. She said that a mysterious snake sneaked into the house and swallowed the money in the vault.”
While speaking in an exclusive interview with CNN, the clerk identified as Philomena Chiesche, denied the allegations, claiming the exam board invented the story about the snake.
She also accused the exam board of turning her in to authorities, who she claims still haven't questioned her about the missing funds.
"I did not say any money was swallowed by a snake. Nobody questioned me about that case. I am just a clerk and I serve under directors who are accounting officers. I wonder why they are personalizing the case?" Chieshe told CNN.
Meanwhile, social media erupted at the incredulous nature of the allegations. A Twitter account has been made for the snake.
Nigeria's Economic and Financial Crimes Commission also tweeted that the agency's national symbol, the eagle, shows no mercy for "money-swallowing snakes."
Top Stories