There is currently a public scare in the city of Port Harcourt after a police officer reportedly opened fire and killed a soldier. 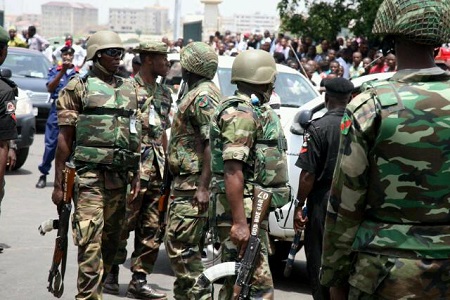 File photo: Nigerian soldiers
TORI.NG earlier reported the killing of a Nigerian soldier by a policeman in Port Harcourt, a development which caused serious stir.
Now, according to a report by Vanguard, Police and Military authorities in Rivers State are currently battling to calm frayed nerves to avert violent police-military conflict after the shooting.
It is reported that the the police officer shot and killed a plain clothe soldier.
Rivers Police Commissioner, Zaki Ahmed who confirmed the incident that happened at dawn today said, “It is very unfortunate, but it is not true that soldiers are chasing police”
The incident involving policemen of the Rumuekani Police Station, Ada George Road, Obia Akpor locality of Harcourt metropolis has seen the station deserted by attached police personnel, just as the men of the controlling Kala Divisional Police Office have all taken a hike as Army and Special Anti-Robbery Squad, SARS, takes over the stations.
Residents in the affected area are also said to be worried as uneasy calm gradually returns to the neighborhood.
Details later...
Top Stories