Following the embarrassing video showing the IGP stuttering in his speech, the law enforcer has reacted. 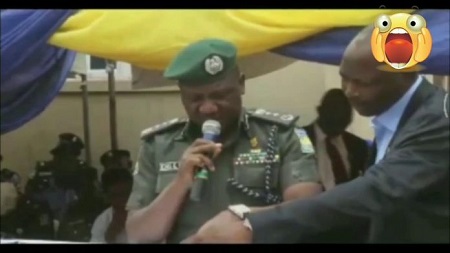 IGP Idris Ibrahim stuttered during his speech
The Inspector General of Police has reacted to a trending video showing him struggling to read a speech at an event. The IGP while responding during the #AskThePolice session on social media held today, said that the video was doctored.
In the video, Idris finds it difficult to pronounce the words, as he constantly repeated “I mean” and “transmission”.

You don't need to be an expert to know the IGP video making the rounds was DOCTORED.

But, I've seen another one that appears not to be...

Intro was fine.... Then sh** got a little twisted.

Responding to a question from Dr Adekola Adewale‏, who asked, “#AskThePolice I saw a video yesterday on social media about the Inspector General of Police not able to read his own speech. Some of us suspect it is a doctored video, can you clarify that please? Thank you.”
Responding through the handle, he said: "Thank you for your question. Yes it was doctored. #AskThePolice."
However, Nigerians have continued to ask more questions as they demanded that the police release the undoctored video to convince people.

#AskThePolice
I saw a video yesterday on social media about the Inspector General of Police not able to read his own speech. Some of us suspect it is a doctored video, can you clarify that please?
Thank you.

Thank you for your question. Yes it was doctored. #AskThePolice https://t.co/lYSpkyRIdh

Someone said the UNDOCTORED video is still being NURSED in the INCUBATOR. It will be released when it's mature.

Do you expect the person behind this tweet to say it wasn't doctored? You want him or her to be fired? Nigerians can shake any tables sha pic.twitter.com/UIqpDNQ0bf

This is the main motive behind this #AskThePolice I guess. I think it will be proper for the Police HQ to release the original video which was not doctored to back up this claim that the circulating video is doctored.