Why APC Governors Protested Against Tinubu At NEC Meeting


Following reports that some Governor protested against him at the National Executive Council meeting of the party on Thursday, the politician has reacted. 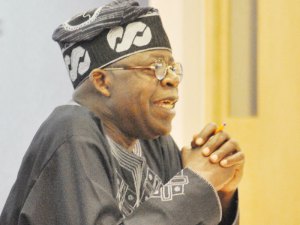 Bola Ahmed Tinubu
The national leader of the All Progressives Congress, APC, Bola Tinubu, has cleared the air after some APC governors protested against him at the National Executive Council meeting of the party on Thursday.
Tinubu who was seen at the venue of the meeting was said to have been denied entry by governors over his position on the use of direct primary which is not in their favour.
Reacting to the report, Tunde Rahman, Tinubu’s media aide in a statement said Tinubu was only at the party secretariat, venue of the meeting because he had an appointment with the national chairman.
He said some governors who were not comfortable with the direct primary model protested his presence, thinking he had come to drum up support.
The statement reads: “Asiwaju (Bola Tinubu) did not attend nor made to attend the NEC meeting. Let me set the record straight for the sake of those who may unknowingly believe the lie set as truth for selfish political reasons. Asiwaju is not a member of NEC because he did not feel he should be ab initio.
“If he had wanted he could have chosen even the lowly one by being an ex-officio member and no one could have stopped him then. He never attended any NEC meeting before now and won’t make to attend any now.
“Truth he had an early morning appointment with the Chairman, Oshiomhole. As he made to leave the party secretariat that Thursday, President Buhari arrived for the NEC meeting. He waited, received the president, saw him enter for the NEC meeting and left.
“But some of those governors who, afraid of their own shadows and possible nemesis by engaging with the generality of their party members at open primaries, are averse to direct primaries, felt Asiwaju had chosen to attend the meeting to canvass support for the model.”
Top Stories