Is Abba Kyari’s Life Really Under Threat In Jail? Check Out What The Prison Spokesman Has To Say

I Have Not Dumped APC - Magnus Abe Cries


Another associate of the Wife of the President, Aisha Buhari, has been reportedly nabbed for duping top politicians. 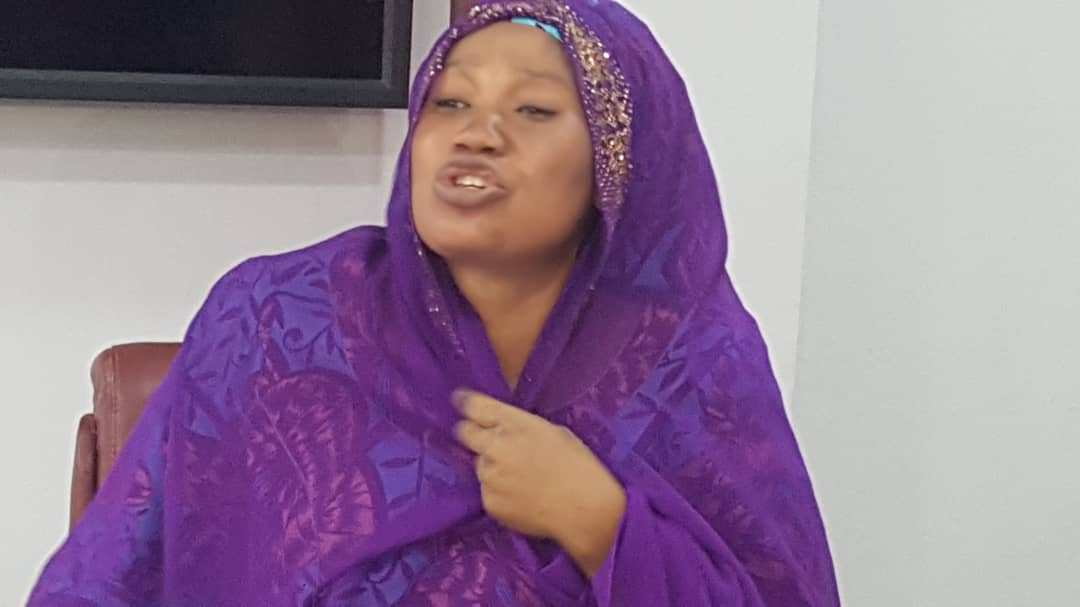 Amina Mohammed
A scandalous scene broke out at the headquarters of the State Security Service (SSS) on Monday, after a fraud suspect paraded by the secret police indicted top associates of President Muhammadu Buhari and his wife, Aisha.
During a press event to parade Amina Mohammed on Monday afternoon, SSS accused the woman, dark in complexion and about middle-age, of gaining unauthorized entries into the Presidential Villa over a period of time, during which she impersonated top government officials, including once identifying herself as the first lady of Kogi State.
Ms Mohammed, whose origin was not immediately learnt, had multiple access to the residence of First Lady Aisha Buhari, SSS spokesperson Peter Afunanya said at the presser.
Using her seemingly unrestrained access to the State House and several cover names, including Justina Oluoha and Amina Villa, Ms Mohammed was then able to cosy-up to persons close to power, including Alexander ‘Chicason’ Okafor, whom she allegedly duped of up to N150 million in November 2017.
The fleece came in a deal which Ms Mohammed and Mr Okafor had on a government property that was placed on sale by the Presidential Implementation Committee on Lease of Federal Government Properties.
Ms Mohammed’s “unholy enterprise is not to the knowledge” of Ms Buhari, the SSS concluded following its investigation.
Naming names
Although Ms Mohammed did not immediately deny SSS’ claims she obtained N150 million from Mr Okafor, the billionaire chairman of Chicason Group, a major logistics and oil and gas firm with dual-headquarters in Lagos and Abuja, she pleaded with Nigerians to ensure she does not suffer the consequences alone.
Ms Mohammed specifically mentioned she worked closely with Moriyatu, a sister of Mrs Buhari, and Babachir Lawal, a former Secretary to the Government of the Federation who was fired for fraudulent diversion of funds meant for Nigeria’s internally-displaced victims of Boko Haram insurgency.
Ms Mohammed said Mr Okafor has been buying government properties for a long time, and he knew he had to bribe officials in order to be shortlisted as a potential buyer of an advertised property.
A spokesperson for Mr Okafor told PREMIUM TIMES he could not immediately comment for the businessman Monday afternoon.
Mr Lawal had been invited for questioning by the Economic and Financial Crimes Commission, and the anti-graft office recently said criminal charges were ready to be filed in the matter.
Still, the case has not prevented Mr Lawal from organising high-level political events towards Mr Buhari’s reelection, neither has it dissuaded the president from associating with his scandal-plague associate.
A spokesperson for Mrs Buhari confirmed to PREMIUM TIMES Monday afternoon that Moriyatu is a sister to the first lady, but denied knowledge of the massive influence peddling affairs at the State House.
“She is part of the family,” Suleiman Haruna said of Moriyatu. “But I do not have any details about whether she was involved in such a thing or not.”
The SSS said Mrs Buhari was not in the country at the time Ms Mohammed was using her name to swindle persons in the corridors of power.
Investigation, investigation, investigation
The scandal comes less than three months after Mrs Buhari accused her security aide of dropping her name to receive humongous financial benefits from people seeking to curry favour at the top levels of Nigeria’s presidency.
The aide, who is a police officer, denied the allegations. His family alleged that Mrs Buhari was only throwing her aide under the bus after using him to amass illicit income since moving into the State House with her husband in 2015.
Identical elements could be deduced from Ms Mohammed’s narration, especially on the claim that she was being singled out for punishment.
After initially frustrating attempts to be interviewed by a battery of reporters, Ms Mohammed ultimately opened up, saying she has been in SSS’ detention since first turning herself in four months ago.
“SSS has been keeping me in this office for four months,” she screamed to reporters in order to get some words across while being dragged back into the service’s secluded interrogation cubicle.
Mr Afunanya, however, denied that Ms Mohammed has been in detention for four months, saying she only turned herself in about the first week in November.
He added that she had been granted administrative bail and allowed to go report at the secret police on schedules.
“Her cantankerous behaviour before the press further speaks to the dubious personality,” the SSS spokesperson said.
Asked repeatedly by PREMIUM TIMES whether Ms Mohammed mentioned Mr Lawal and Mrs Buhari as her co-conspirators during interrogation and what was done to determine the veracity of her claim, Mr Afunanya said the matter was under investigation.
He also could not immediately say whether Ms Mohammed was a player in a syndicate, and similarly rebuffed all other questions about the scandalous affair.
A storied office
The office of Nigeria’s first lady, although not constitutionally or administratively recognised, has long been a major feature of presidential tenures, and with it have come multiple financial scandals.
During successive military juntas between mid-1980s and late 1990s, wives of heads of state were known to have been involved in unbridled lavishness, aided largely by questionable wealth they often hit upon assumption of office.
The culture dovetailed when Nigeria returned to civil rule in 1999, with unconscionable opulence often associated with first ladies in a country consistently ranked amongst the top poorest in the world.
The exit of Patience Jonathan as Nigeria’s first lady in 2015 was characterised by allegations of corruption. Anti-graft agents said they discovered billions in questionable and primitive accumulation of wealth during a cursory look into her finances.
One of the accounts of Ms Jonathan frozen by the EFCC had over $15 million in it.
Ms Jonathan strongly denied all allegations of fraud, saying she inherited from her late mother who was a petty trader while the rest came as gifts from some of her husband’s associates.
Many of the discoveries are still subject to ongoing judicial proceedings.
***
Source: PREMIUM TIMES
Top Stories

Is Abba Kyari’s Life Really Under Threat In Jail? Check Out What The Prison Spokesman Has To Say