A sad incident involving Nigerian soldiers has claimed the life of a mother of six on new year's day. 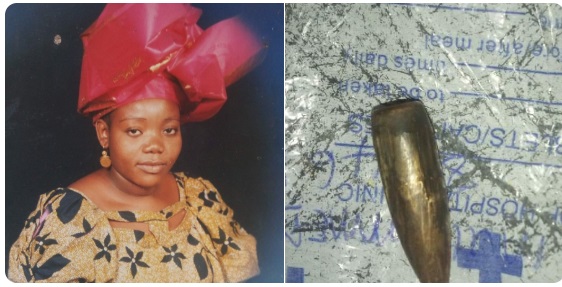 The woman killed by soldier's gun
A woman was killed after being hit by a bullet fired by men of the Nigerian Army on 1st January 2019 in Borno state.
The deceased identified as Aisha Mohammed, a mother of six (6) children lost her life after being hit by a stray bullet on her matrimonial bed in the early hours of 1st January 2019 along 7 Div Garrison along Pompomari bypass in Maiduguri, the state capital.
Mohammed Abubakar, the husband of late Aisha Mohammed, narrated that the incident happened on that fateful day when his wife complained to him of stomach pain following the incessant gunshots fired by men of the Nigerian Army and Policemen which lasted for hours .
Mohammed Abubakar noticed that there was blood stains on his wife after the complaint. He called on his neighbours before rushing the wife to the hospital.
Aisha was attended to and was later transferred to a laboratory for a scan where it was confirmed that a bullet was lodged in her stomach and she needed a surgery.
Late Aisha Mohammed didn’t not open her eyes or regain consciousness hours after the surgery.
The bereaved husband narrated that was how his wife lost her life and left behind six children and other family members..
Source: Dogo Shettima.
Top Stories