A pregnant woman has reportedly stabbed her housemaid over a trivia matter, sparking a stir in her community.

The maid (left) and the pregnant woman (right)
In what will come across as a really shocking development, a woman has stabbed her little housemaid.
The woman who happens to be pregnant, has since been arrested for the barbaric act and is in police custody.
Local reports show that the pregnant woman stabbed her underage housemaid on the head over the unauthorized use of her gel.
The incident happened yesterday in Ubomiri, Imo State and got all the neighbours really annoyed. They quickly mobilized and got the woman arrested.
After the stabbing, the little girl was administered first aid by the neighbours who came to her aid.
See another photo below: 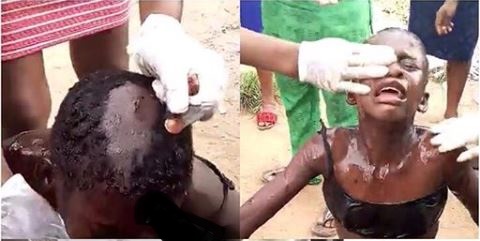