A woman who returned millions of naira to its owners has lamented during a recent interview. 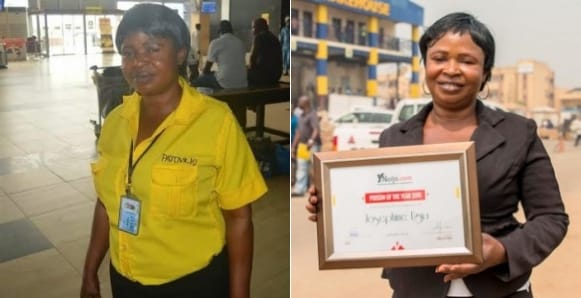 Josephine Agwu
Josephine Agwu who returned N12m to the owner at the Muritala Mohammed Int Airport, Lagos in 2015 has lamented on television after being neglected.
Josephine, an airport cleaner, found the huge sum in the toilet and instead of her to run away with the money, she decided to pass it over to the airport management.
This turn of event made Josephine gain popularity in Nigeria.
Back in 2014, Ms. Josephine Agwu found N12 million inside the airport toilet and returned it. She was praised and received cash gifts for the commendable act. Subsequently, she also found N10 million, N8 million, and N7 million forgotten by travellers in the airport, and each time, she returned the suitcase containing the money over to the authorities.
In a recent interview with Legit TV, Ms Agwu complained about the level of poverty in Nigeria. She also pointed out that in other countries, she would have been better rewarded for what she did, but that isn’t the case in Nigeria.
She said:
"As you see me, I’m a person people know the whole world today. But see.
Nobody in Nigeria do what I did.
I return money four times in Nigeria. I’m a cleaner, the year 2014 in Murtala Muhammed, return 12 million, return 10 million, return 8 million, return 7 million.
But if na other countries, I’ll be an ambassador to telling youths that honest is paying. But now see. They close it. Nobody to remember it."
Watch the video below

Airport cleaner who returned millions forgotten in airport, complains about not being made an amabassador for her integrity Credit: @legittv