A plane has been caught on camera bouncing and swerving on the runway before bursting into fire and killing 41 people. 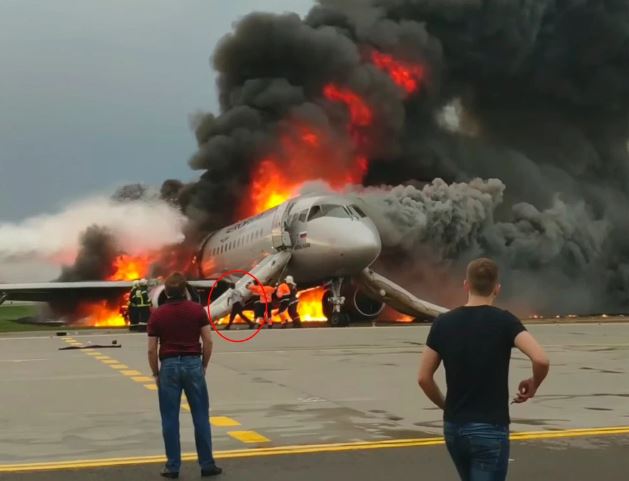 The jet burst into flames immediately after - one of the pilots is pictured returning to the plane
Horrifying new footage shows the a Russian passenger plane bouncing along the runway after getting struck by lighting and before it burst into flames, killing 41.
The new video shows the rough “jumping landing” of the Sukhoi Superjet 100 at Moscow’s Sheremetyevo airport and the moment the fire ignited on May 5.
A lightning strike soon after take-off forced the pilots to make an emergency landing but this should not have led to the flames in which dozens were burned alive or killed by toxic fumes, say authoritative figures in Moscow.
The horrific Moscow plane inferno was caused because the crew was so used to deploying autopilot that they made elementary errors when they had to fly manually, reports say.
This comes as an expert claimed the experienced captain Denis Evdokimov - hospitalised as a result of the crash - had never previously manually flown the Sukhoi Superjet 100 in so-called “direct mode” before the horror.
Now reports say the crash investigation is leaning towards “pilot error” over the landing during which the plane ignited in a fireball.
And leading Moscow experts say an “over-dependence on autopilot” on commercial flights is an issue that should be addressed by all major airlines.
Despite the lightning strike which disabled the plane's internal communications, an emergency landing in manual mode should have been relatively straightforward, according to Kommersant newspaper which cited sources in the official investigation.
'PILOT ERROR'
It added: "It was the pilots themselves who dangerously speeded up the aircraft immediately before landing and, on top of that, put it into a dive”.
This made the situation “critical”.
Kommserant stated: “Now the investigation is to establish which of the two pilots performed the dangerous manoeuvre that cost 41 lives."
Vadim Lukashevich, aviation expert and former designer at Sukhoi Design Bureau, said: “I believe that this catastrophe is a consequence of a set of mistakes of pilots that began from the moment when lightning hit the plane.
“It caused problems but they were not critical. The decision to return was right.
“But then the pilots had to remember they actually are pilots and had to fly the plane the way that was normal for international aviation 40 years ago, without autopilot.
“To my knowledge, the commander of the aircraft Denis Evdokimov who has flown over 1,400 hours on SSJ-100 had never landed in Direct Mode (fully manually).
“They were landing normally, with a glide path but they pushed the nose down and increased the speed before landing.
“It was lucky that the front gear didn't break. If that happened, the consequences would have been even worse.”
He said: “I believe that the incident is the result of a piloting mistake.”
The Russian-made plane “fell from the height of a three-storey building. No airliner existing today would have endured such a landing".
Top Russian test pilot Viktor Zabolotsky said: “The pilots did everything right initially.
“They went on a second approach, and came towards the runway on a glide path.
“Traffic controllers were absolutely calm and started discussing where they should taxi after landing.
“It is hard to say at which stage mistakes were made - most likely when levelling.
“Anyway it is not a proper landing when the front landing gear touches down first, not the rear.
“They should have gone for another approach. The stability of the plane was compromised.
“In this situation you should either hold and the plane levels but this bears risks, because it might not, or to go for another approach.
“That’s the best thing to do. It could have been (corrected) after touchdown too.”
He added: “Most likely they were not well-trained in this mode when you need to both manage the plane and the engines.
“That is, there were two mistakes. A mistake during landing - and a mistake at fixing that mistake.
“The plane sustained all imaginable and unimaginable forces at such landing.”
He said: “The plane sustained all imaginable and unimaginable forces in this landing.
“The force it is built for is 3.6G but there was 5.5G or even more.
“Even with such hit the plane stayed intact… everything sustained it apart from areas where the gear is attached to the wings.
“The fire began when the gear crushed the [fuel] tanks, fuel leaked out and caught fire from sparks - the tail scratching the runway.
"There could have been an explosion.
“The crew should not allow such forces at landing, but the plane itself is good.”
Watch the vidoe below:
***
Source: The Sun UK
Top Stories