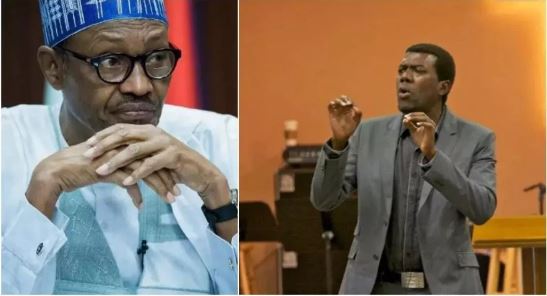 Buhari and Reno
Reno Omokri, former aide to ex-President Goodluck Jonathan, has taken a swipe at the General Superintendent of the Deeper Christian Life Ministry, Pastor William Kumuyi after he urged Christians not to attack President Muhammadu Buhari.
Kumuyi, who gave the admonition during his sermon at the Deeper Life Bible Church, Headquarters, Gbagada, in Lagos said that real Christians must obey constituted authorities and shun violence.
He had said: “Don’t attack the President of the country whether in words or in the newspapers or through internet.
“Honour kings; don’t disrespect or dishonour the governors. Don’t disrespect leaders of the community and leaders in the church.”
However, Omokri dismissed Kumuyi’s call, saying even Jesus Christ criticised a king during his life time on earth.
In a tweet, the former Presidential aide cited Luke 13:32 from the Bible to buttress his point.
According to Omokri: “Dear Pastor Kumuyi,
“Jesus, who came from heaven, criticised King Herod, a political leader (Luke 13:32). Paul, who went to heaven and returned to Earth, criticised Peter (Galatians 2:11). So, should we obey Them or you? #FreeLeahSharibu #RenosNuggets.”
Top Stories