An army commander and some others have gone missing after deadly Boko Haram fighters dislodged some Nigerian troops in Borno. 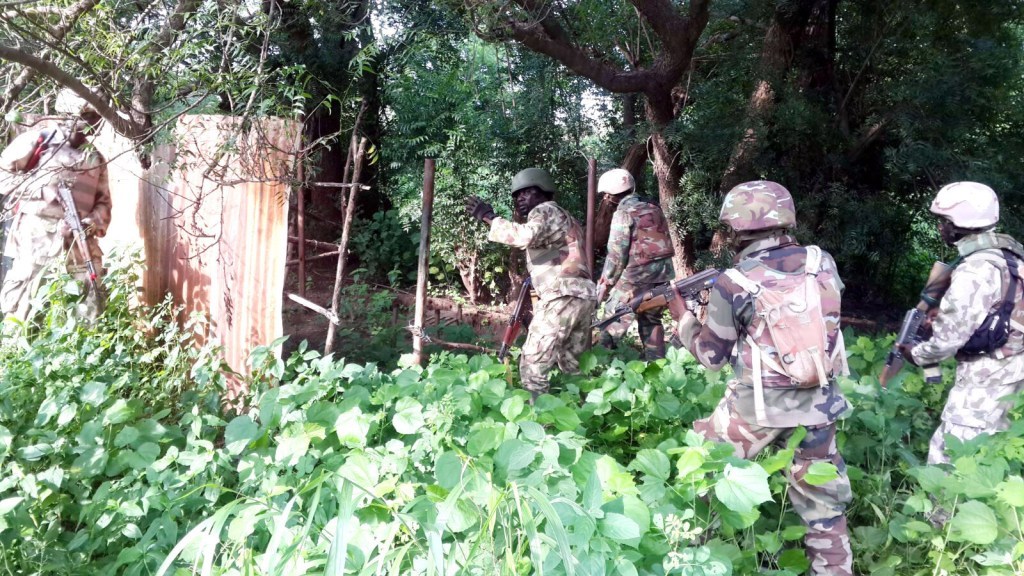 File photo: Nigerian soldiers
According to a report by Premium Times, an army commander and six soldiers are currently missing after two bases of the Nigerian military in Borno State came under Boko Haram attack on Saturday, with one soldier feared dead.
There was also a loss of “unquantifiable” combat equipment in the wake of the terrorists’ offensive, Premum Times was told.
The terrorists attacked troops of 192 Battalion deployed to Delwa Village, along Maiduguri-Damboa Road in Konduga Local Government Area, and their colleagues attached to 242 Battalion in Marte LGA towards Lake Chad, according to army sources.
The two attacks appeared coordinated as they were unleashed about the same, 6 p.m. on Saturday.
Saturday’s incidents followed an earlier attack, on May 22, on an army base in Gubio LGA of Borno State. The Gubio attack was on the camp housing the Nigerian Army 5 Brigade and the 159 Task Force Battalion, and it left at least one soldier killed and three others injured.
But despite the attack suffered on May 22, the army chief, Tukur Buratai, insisted that Boko Haram had been defeated in a statement last Thursday – just two days before the latest attacks.
The terrorists, who attacked the 192 Battalion reportedly launched from Alagarno forest in Damboa LGA in four Armoured Personnel Carriers and 12-gun trucks.
Although the troops were initially dislodged, reinforcement from Maiduguri, about 30km away, helped them retake the base after the terrorists had withdrawn.
However, despite retaking the base, one yet-to-be-named soldier was killed, while six others, also not named yet, became missing.
Also, the terrorists burnt a T55 armoured tank, made away with two gun trucks, a canter truck, one armoured personnel carrier, mortal gun and unquantifiable ammunition, sources said.
“Reorganisation of the camp is currently ongoing,” said a military source with knowledge of the development.
He added that a commanding officer and many soldiers were missing in action.
The other attack suffered on Saturday left the troops of 242 battalion in Marte “completely dislodged” with no reinforcement unlike the Delwa incident, our source said.
It was said to be a much easier operation for the Boko Haram as they “had enough time to cart away arms and ammunition.”
Following the dislodgement on Saturday, 15 soldiers later appeared in Dikwa, the brigade headquarters on Sunday.
The commanding officer and many soldiers were still missing on Sunday.
Army spokesperson, Sagir Musa, did not confirm the incidents when reached on Monday.
Army authorities are usually known to downplay losses on their part during confrontations.
The North-east has been rocked by an unending insurgency that has claimed thousands of lives and displaced many over the years.
Top Stories