President Trump Goofs After Forgeting Own Gift To Queen Elizabeth


President Trump was rescued by his wife, Melania Trump after he forgot his own gift to Queen Elizabeth II. 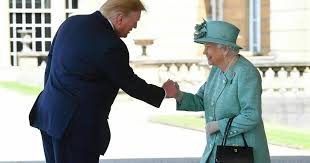 President Trump and Queen Elizabeth II
The US President’s memory lapse regarding a gift he’d presented wasn’t the first, as in December his eldest son Donald Trump Jr. confessed that his father was known to be something of a “regifter”.
In a saving face moment, first lady Melania Trump appeared to come to her husband President Donald Trump’s rescue during their UK state visit on Monday when he seemingly failed to recognise a pewter horse statue he had previously given as a gift to Queen Elizabeth II, writes the Guardian.
As the Trumps were being given a tour of Royal Collection artefacts at Buckingham Palace’s picture gallery, the president was shown a pewter horse he had given the Queen during his previous visit.
When asked if he recognised the statue, the president responded:
“No,” according to the Guardian.
“Yes, this is one of ours,” Melania Trump was reported to have pitched in, rescuing her husband from further embarrassment.
The Trumps had given the pewter horse to Queen Elizabeth II last July at Windsor Castle.
Source: sputniknews
Top Stories