Shatta Wale and Stonebwoy held a press conference to address the media on their peace campaign as well as to announce their soon to come peace concert. 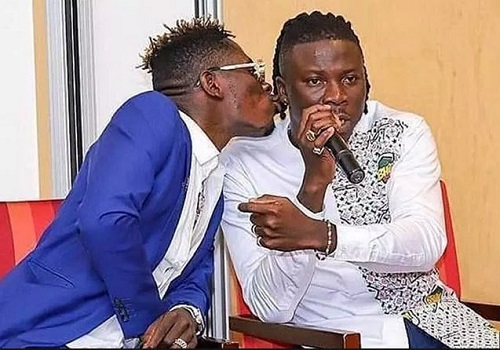 Shatta Wale and Stonebwoy
To prove that he has truly smoked the peace pipe with arch-rival Stonebwoy, Shatta Wale gave his one-time hottest ‘enemy’ a kiss on the cheek to signify a complete burying of the hatchet.

At a press conference organised by the Kofi Abban Foundation in Accra Tuesday afternoon, Shatta Wale caught Stonebwoy off-guard when by kissing him on the cheek.

On the substance of the press conference, Stonebwoy reiterated his apology to fans of both camps for the scuffle that happened at the Vodafone Ghana Music Awards where he pulled a gun after Shatta Wale attempted to mount the stage uninvited.

Shatta Wale, on his part, pleaded with the media to push the brand of artistes and stop publishing that end up tarnishing the images of such brands.

‘Shatta Movement’ and ‘BHIM Natives’ as the fans of the two artistes are called, were urged to brace themselves up for a peace concert to put an end to the bitter rivalry which appears to be nearing its end.

The artistes also had leading members of their management teams, Black CD and Bulldog gracing the press conference.

Meanwhile, both musicians are expected to re-appear in court on June 20, 2019, following the brawl the happened at the VGMA which led to their arrest and bail.