Popular American actor, Tracy Morgan has been involved in a crash shortly after buying a $2 million convertible. 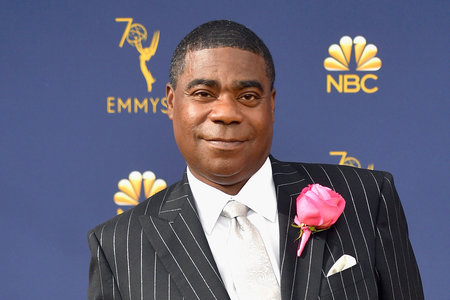 Tracy Morgan
According to New York Daily News, Tracy Morgan’s first spin in his brand new $2 million convertible only lasted a few minutes Tuesday after the comedian got into a fender bender in Hell’s Kitchen — about a half-mile from where he bought the car.
Morgan, 50, was behind the wheel of a Bugatti Chiron that he had just driven from the dealership on 51st St. and 11th Ave. when it was sideswiped by a woman driving a Honda CRV at W. 42nd St. and 10th Ave. at 1:35 p.m., police said.
“This was his dream car. He was talking about it all weekend,” Michael Sexton, the Bugatti sales manager at Manhattan Motorcars, told the Daily News. “He couldn’t wait to get it. It was something he wanted to leave to his daughter. Luckily it wasn’t that bad. It’s something easy to repair.”
Sexton said Morgan picked up the lux wheels about 30 minutes before the accident.
“Everyone was excited to see such a fancy car around here,” eyewitness Antoinette, 23, said.
"She ran into him. He got out and he was talking to the police. I wanted to take a picture with him but he just got into a car accident,” the witness said.
Morgan sat in an ambulance and was checked out by EMS, witnesses said.
“Thanks for any concern but I am totally fine,” Morgan later tweeted. “My NEW CAR? We shall see. Love you all.”
Morgan called Sexton, the man who sold him the car, right after the crash.
“She was making a right turn from the left lane and hit him," explained Sexton, who went to the scene. “He called me and told me ‘A lady just hit my car.’ I said, 'You’re kidding me. I just delivered it.’ The lady was on her phone. That’s what the witness told me."
Manhattan Motorcars employee Frank Pica said Morgan is a beloved customer who owned a 2008 Bugatti.
“Those cars are exceptionally rare and to get one of any year is special,” Pica said. "He just bought it today. That style with no top is usually (worth) over $2 million. It’s the first time he drove it.
"I couldn’t believe it. It was his maiden voyage,” Pica, 37, added. “Thank God it was a scratch. It was actually more of a rub.”
Morgan returned to the showroom a short time later, Pica said.
“When he came back, a little kid followed him in," Pica revealed. "He said ‘Mr. Morgan I want to make sure you’re alright.’ He lifted the kid up and held him. Everybody was smiling.”
The accident happened three days shy of the five-year anniversary of the horrific New Jersey Turnpike smash up that killed one of Morgan’s friends and left the “Saturday Night Live” alum critically injured when the van they were in was hit by a Walmart truck.
The driver of that tractor trailer was awake for more than 24 hours prior to the accident.
Top Stories